Top 10 Tuesday is a post hosted by The Broke and the Bookish and this week's topic is Top Ten Books I Thought I Would Like More/Less.

The Ones I Expected More From:

1. Incarceron by Catherine Fisher - I loved the book cover. And even the premise of the prison being alive. But this book fell WAY flat for me.

3. Anna and the French Kiss by Stephanie Perkins - Dude, everyone made such a huge deal out of this book. And while it wasn't BAD by any means, it just wasn't as big of a deal to me as to everyone else.

4. Notorious Nineteen by Janet Evanovich - I've come to expect my Stephanie Plum books to be hilarious. And I guess it's hard to consistently write material that makes people laugh out loud. And after 19 books in a series, perhaps the funny has run dry. But either way, I expected more.

The Ones that Pleasantly Surprised Me: 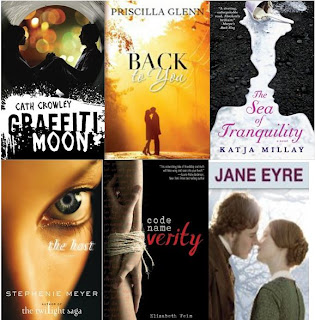 5. Graffiti Moon by Cath Crowley - I won this in a giveaway, but truth be told, I just didn't expect much of anything out of it. Perhaps I liked it as much as I did because I wasn't expecting much.

6. Back to You by Priscilla Glenn - I almost turned this book down when the author contacted me about reading and reviewing it. But I chose to take a chance and I couldn't put it down.

7. The Sea of Tranquility by Katja Millay - I requested this one from NetGalley but just had this uneasy feeling like I might be requesting one that I'm not going to get into. I think it was the cover that I didn't really love.

8. The Host by Stephenie Meyer - Well I wasn't a vampire fan when I read Twilight, and I wasn't a sci-fi fan when I read The Host. I expected to not enjoy The Host because aliens just aren't really my thing, but this turned out much better than I thought. It had a slow start and I didn't think the romance was near the level of Twilight, but I still enjoyed it. (Haven't reviewed this one. Link goes to Goodreads.)

9. Code Name Verity by Elizabeth Wein - Everyone reviewed this one and loved it. And while most every review I saw on it said that the reader went into it not really expecting much but ended up loving it, I still felt like the description didn't draw me in. I love love stories. Not best friend stories. But I did end up loving it.

That's it for the books that either exceeded my expectations or have let me down. What about you? What books did you like more/less than you expected? Let me know!