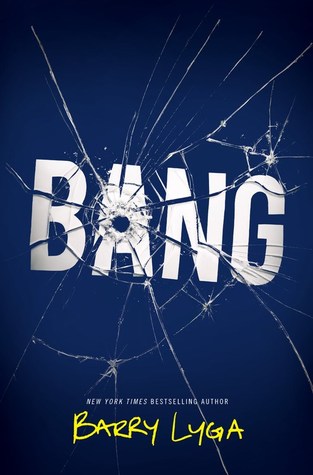 I really enjoyed Barry Lyga's Jasper Dent series. His writing was so good that I knew I'd be interested in checking out more of his work. The description for Bang immediately made me wonder if "gun control" would be a political statement shoved down my throat throughout this book, but the emotional roller coaster that would surely be involved was enough to make me pick this book up. I was curious to see how Barry Lyga would handle such an emotional topic compared to the twisted nature of Jasper Dent.

Bang hooked me in a way that other books haven't been grabbing my attention. I'm in a bit of a book slump so to read a book in 24 hours is a big thing for me right now. The writing was well done as I expected. And while perhaps there were a few moments that could count as a PA concerning gun control, I didn't truly feel like there was much of an agenda pushed so much as the characters simply reacting to events in a way that felt completely natural given the circumstances. If anything, the political statements made revolved more around Aneesa and her father for their muslim faith than anything else. However, this still didn't bother me as Aneesa and her father were both likeable characters and also simply reacting in a way that felt entirely natural.

As one would expect, Bang is a deeply emotional read. It felt even more emotional for me because Little Girl is right at a year and a half. To imagine having a four year old child shoot and kill your four month old... It is simply heartbreaking for everyone involved. It's impossible as a mother not to be heartbroken by this story...both for the parents, but also for the children. The guilt that everyone involved feels. The father for it being his gun used. Sebastian for having pulled the trigger. The mother for having at one point hated your son. All of it. It is everything you would expect one to feel.

It isn't a surprise that a situation where a 4 year old shoots and kills a 4 month old could cause one to question God. How could a loving God allow such an event to happen? And if He does exist, how could He forgive a young boy for killing his sister? This wasn't a huge part of Bang truthfully there were only two comments made in passing, but as a Christian, I can't help but zero in on these things. Bad things happen in this world because God gave us free-will. Otherwise we'd all be robots running about doing His will. Love isn't much of anything when it is forced upon us. So truthfully LOVE is the reason (through free will) that bad things happen. And when you think about it, maybe it isn't such a big surprise that an infant would die when God allowed His own Son to die (for us). When bad things happen that we don't know how to explain, people often forget what God gave up for us because they're only concerned with how this bad thing has happened to them. Who do we think we are when we expect God to leave us be to live our lives however we want with no concern for Him in the day to day, yet we expect Him to save us from the things that break our hearts or cause us pain? This area of Bang was a slight frustration for me. Though believable and understandable, I'd like to--for once--see a character work through these thoughts and come out on the side of understanding that God is still good even though bad things happen.

Truthfully I didn't highlight much. There were a couple passages I highlighted but don't want to share outside of the context, and then there were the two religious references I highlighted so that I could note my frustration. But I will share this quote:

Overall Bang was an emotional read for me. I liked seeing how Sebastian was both stuck in the past and trying desperately to move forward. While I did enjoy this book overall, I'm not sure who I would recommend it to. Someone who is simply looking for an emotional and thought-provoking read I suppose. Ultimately, Bang gets 4 Stars from me. Have you read Bang? What did you think? Let me know!