A Cowboy for Keeps - Review 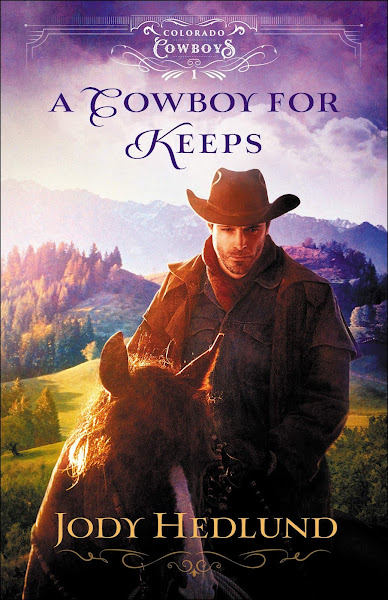 A Cowboy for Keeps (Colorado Cowboys, # 1)

Goodreads description--Greta Nilsson's trip west to save her ailing little sister, Astrid, could not have gone more wrong. First, bandits hold up her stagecoach, stealing all her money. Then, upon arriving in Fairplay, Colorado, she learns the man she was betrothed to as a mail-order bride has died. Homeless, penniless, and jobless, Greta and her sister are worse off than when they started.

Wyatt McQuaid is struggling to get his new ranch up and running and is in town to purchase cattle when the mayor proposes the most unlikely of bargains. He'll invest in a herd of cattle for Wyatt's ranch if Wyatt agrees to help the town become more respectable by marrying and starting a family. And the mayor, who has promised to try to help Greta, has just the candidate in mind for Wyatt to marry.

I just love marriages of convenience. I can't seem to get enough of them. I love seeing two characters make a decision to commit to something before feelings are involved and then work towards finding a way to develop those feelings. Logic usually ties the two together in the beginning, something they both get out of the agreement, and then the process of them working together towards a common goal and learning about each other brings about the feelings and emotions one would hope to be involved in marriage. Well A Cowboy for Keeps was right up my alley.

Greta is the only one left to take care of her little sister. Her mother and father have both passed away, and her brothers have married and have families of their own. Astrid suffers from consumption and her medical needs have become a burden to her brothers' families. Greta is encouraged to marry and take Astrid with her when she does. That being said, Greta has heard that the mountain air out in Colorado is good for consumption, and she accepts a mail order bride offer from a nice middle-aged man in Colorado. The only problem is, when she shows up in the town he's from, it appears he's died leaving her in a worse position than she was in before. The mining town offers nothing for a single woman except work that Greta isn't willing to take.

Wyatt left his family in hopes of striking gold, but when mining didn't turn up much luck for him, he switched to ranching. His goal is to bring his mother and siblings to his ranch once he gets it established to get them away from his abusive stepfather. The only problem is that Wyatt is struggling and using every spare penny to invest back into the ranch. He needs an investor and finds the potential for one in the town mayor. The only trouble is, the Mayor needs to convince his city-wife that the town is turning from a manly-mining town into a civilized, family-oriented place. So the Mayor seizes the opportunity of Greta being a single woman in need of a husband and Wyatt needing an investor and himself needing a family town to make an agreement. Wyatt will marry Greta and get his cattle.

Of course, things aren't all that simple. Wyatt gives Greta a three-month window for them to get to know each other before they decide whether to continue their arrangement or to split ways. Astrid isn't getting better. And the entire purpose of coming to Colorado was to help Astrid. Wyatt has an enemy in a neighbor and fellow cattle rancher. The nature of their arrangement hasn't been fully spelled out to Greta (even though she would have accepted it either way). And more issues that would be spoilers to mention.

I've read Jody Hedlund before and enjoyed her books and this one was no different. I finished it basically within a day, and I was left wanting more. The last chapter gives you an idea of the direction for the other books in the series, and I am certainly interested in them and will be stalking her to find out information on future releases. A Cowboy for Keeps had characters I liked and was happy to root for, a conflict that was a little predictable but not in a bad way, and a relationship of convenience which I happen to love. A Cowboy for Keeps gets 4 Stars. Have you read A Cowboy for Keeps? What did you think? Let me know!