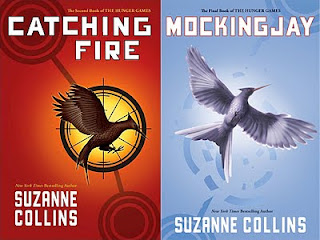 First of all, my computer did an automatic shut down in the middle of typing this post. Thanks to Blogger’s auto save feature, I didn’t lose everything, but I did lose a good bit.  Oh well, that’s life. On we go…take 2.

Because I read these books so quickly and so close together, it is somewhat hard to keep them separate in my head. And so much of how I feel and want to say applies to the whole series. So for the first time ever, I'm doing a joint review. I'm going to try my best to separate them as best as I can though.

For me, Katniss has trouble with her emotions coming out—or not coming out in this case. It makes sense considering how much she has already been through at the beginning of Hunger Games and how much she has yet to go through. But it almost seems like consciously or unconsciously, most every decision she makes in respect to her relationships with Gale and Peeta are made to rebel against the Capitol. Gale is pretty open about where he stands at the beginning of the Hunger Games, but Katniss doesn’t return those feelings. Then Katniss and Peeta decide to pursue the strategy of presenting themselves as a couple to the Capitol. In the first Games, Katniss and Peeta have these interactions that neither Katniss nor the reader knows how real and how deep those interactions go—or again, don’t go. Katniss achieves the rebellion she seeks—again consciously or unconsciously—with the show of her relationship with Peeta. But as soon as the games are over and the Capitol isn’t watching their every move, Katniss backs away. But the Capitol isn’t done with Katniss and Peeta. The Capitol wants more of the lovely couple. And it is my belief that Katniss returns to Gale because the Capitol demands so much of her relationship with Peeta. In essence, taking her choice away. I think that’s what she rebels against the most. And so, on and on it goes. When the Capitol calls for Katniss and Peeta, she reverts to Gale. But when the Capitol gives her release and freedom to pursue Gale, she changes her focus back to Peeta. It is obvious that she doesn’t spend a ton of time focusing on figuring out her emotions and how she feels. But who can blame her with all that she’s been through?

Mockingjay had a different feel to me than the other two books. It focuses on the war between the Capitol and the Rebels rather than the Games. Although, I suppose the war itself is really just a multiplied form of the Games. Especially because both the Capitol and the Rebels are trying to manipulate Katniss into being who they need her to be and behaving how they need her to behave. Seriously these books—this entire series—was majorly stressful to read. I was paranoid throughout the whole series, but especially through Mockingjay. I wanted to know which characters survive and which characters we lose—due to the nature of war, we can’t save everyone. Some must die to protect the masses. I really felt like the series ended exactly the way it needed to end. And that’s as much as I’ll say about that. One final comment about Mockingjay, there were parts in this book that I found hard to follow. I didn’t really experience this in the other two books, but multiple times in Mockingjay, I had to stop, say “What just happened?” back up, and re-read. I don’t enjoy that. It messes up my rhythm.

Posted by Somewhere Only We Know at 9:21 PM