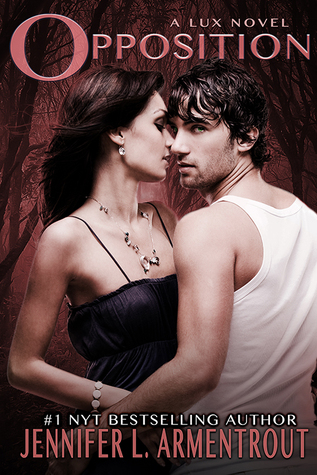 She can't believe Daemon welcomed his race or stood by as his kind threatened to obliterate every last human and hybrid on Earth. But the lines between good and bad have blurred, and love has become an emotion that could destroy her—could destroy them all.

Daemon will do anything to save those he loves, even if it means betrayal.

They must team with an unlikely enemy if there is any chance of surviving the invasion. But when it quickly becomes impossible to tell friend from foe, and the world is crumbling around them, they may lose everything— even what they cherish most—to ensure the survival of their friends…and mankind.

War has come to Earth. And no matter the outcome, the future will never be the same for those left standing.

I don't really understand why, but when Opposition released I wasn't dying to pick it up. I knew I'd want to get around to reading it eventually, but the pressure and excitement wasn't burning for me this time. I think that's because even though I ended up enjoying the previous two books, they both were a struggle for me in some areas. Just like Opal ended in a cliffhanger that separated Daemon and Katy then Origin started with them being in different places and having to find a way back to each other, Origin ended with them separating again and Opposition began with them needing to find a way back together. Thankfully it didn't taken as long in Opposition to reunite them as it did in Origin. And in the end, I hate that I put off reading it for as long as I did.

Jennifer L Armentrout does a good job pulling me in with the characters and the events even when I have issues with both. I love Daemon and Katy. I love them together. I especially love Daemon. I think I've said it every time I've reviewed a book in this series, but Daemon is what book boyfriends are made up. He's a bad boy. He's got attitude. He can make you laugh. And he can get you all hot and bothered at the same time. Katy does a good job holding her own, although one of the things I praised her for in the last book wasn't true in this one. I do have to say that some of the crazy language used got on my nerves in this book. While I could buy it more easily if that kind of language came from one character, when every character narrating and even just some of the dialogue from others is the same I find that to be less authentic. Here are some examples:

-Holy Arum babies, there was a buttload of Arum here.

-Holy run for the freaking hills and don't look back, were they actual bones?

-"I know Arum and Luxen are BEFs, but seriously, they are being super cool by letting us stay here." "BEFs?" I frowned. "Best Enemies Forever,"...

I do have to say that it's been over two years since I read the last book in the series so maybe I'm not remembering correctly, but even though the characters are fighting an alien invasion, I felt like they've faced stronger opponents before. Or maybe more accurately, the opponents were just as strong in this book yet defeated so easily it seemed. And because of that Opposition felt lacking a little to me in this area when compared to the rest of the series.

Another small thing..normally I don't like when a character references events reminding them of a fiction book because it takes me out of the story and reminds me as a reader that I am in fact reading fiction. However, it made sense for Katy to make these references because she's a book blogger (or she was earlier in the series). I've always loved the tip of the hat that JLA does to us bloggers with Katy, but it didn't stop me from being pulled out of the story a little until I had to remind myself that for Katy it did make sense. Also while I normally hate modern pop culture references, the heated discussion that Daemon and Archer have about whether or not Shane would have been a better father than Rick from The Walking Dead was pretty ironic since I'd literally watched Season 7 Episode 4 of TWD where Rick finally admits to Michonne that Judith is Shane's daughter moments before reading that scene. I still don't love the pop culture reference, but I did find it timely.

-"Get out of my head." "I can't help it," Archer replied from where he sat on the couch. "Your broadcasting your thoughts so [...] loudly I feel like I need to go sit in the corner and start rocking, whispering Daemon's name over and over again."

-Kitten got claws and then some. "She doesn't play nice with others,"...

-"I have the skills that count, Kitten."

I'm glad that I can finally mark Opposition as "read" and the Lux series as "complete." While I don't think that the series or this book was without some major faults, I found myself hooked into the characters and events more often than not. I still love Daemon. I love the way he loves Katy and his family. Ultimately, Opposition gets 3.5 Stars from me because I don't feel like this was the most intense book along with the other things that bothered me. I still really enjoyed the series overall. Have you read Opposition? What did you think? Let me know!