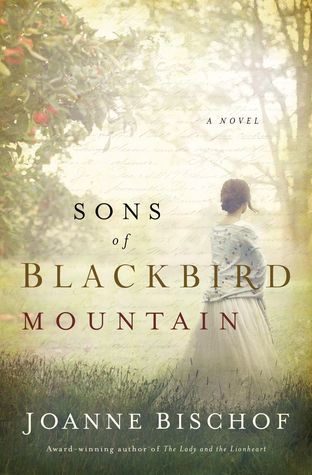 Goodreads description--When Aven Norgaard leaves Norway to serve as housekeeper to her late husband’s cousins in Appalachia, she expects lads in need of care, not three grown men—each in need of a wife and bound by a powerful brotherhood. As the men carve out a living by brewing artisan liquor, young Haakon’s pursuit tempts Aven’s lonely spirit . . . but it is his deaf brother, Thor, whose silent strength shows her the depths of real love.

Unable to speak to any woman, Thor Norgaard never anticipates Aven will befriend him, let alone treat him as her safe harbor. Though hard cider is their livelihood and his greatest talent, he fights his way to sobriety with Haakon’s help, defying the bottle for Aven’s hand—only to face a battle of the heart that tests even the strongest bonds of brotherhood.

I waited longer than I'd normally like to write my review of Sons of Blackbird Mountain. That being said, I wish the details were a bit more fresh in my mind while writing this review. I didn't get hooked immediately, but I will say that it didn't take me long to feel invested in the characters and their story.

Sons of Blackbird Mountain takes place in a time period that's on the verge of one that I normally don't enjoy reading. The topics that I can sometimes shy away from were present in a way that felt honest, but I also didn't feel like I was being beat over the head with preaching where these subjects were concerned. I applaud Joann Bischof for being able to tackle these subjects in a way that didn't make me want to stop reading.

I loved most of the characters. Aven, Thor, Yorgan, Haakon (more on him later), Ida, Cora, and even more. Aven married Ben Norgaard as a matter of survival. We don't know too terribly much about their relationship beyond a few details that I don't want to spoil. But Ben has died. When Aven receives a letter and offer from Ben's aunt to come to America to help her take care of his three cousins she jumps at the chance. She has no other family living. Upon arrival Aven finds that the three cousins are grown men quite capable of taking care of themselves. And Aunt Dorthea has passed as well. Aven doesn't have much choice but to stay and help the Norgaard men around their apple tree orchard/farm. And she finds a family within them.

Thor is deaf. I've mentioned before that a friend of mine had a daughter born deaf, and I've found myself picking up books that feature deaf characters just about every time I see them. I loved Thor's character. If you think few people know sign language (ASL, BSL, or any other sign language) now then imagine how few there would have been two hundred years ago. Thor is lucky in that he was able to learn ASL and teach it to his brothers. Thor had some battles to face big time and I loved that he wasn't a perfect hero. Instead he was very relate-able. His struggle to communicate was both heartbreaking and beautiful. And I loved seeing Aven find ways of communicating and making life easier for him where she could.

Haakon is youngest brother. Their mother died during childbirth with him. This obviously plays a role within the family. Even though he's over twenty, Haakon still has a lot of growing left to do. I loved how Aven thought and felt about him. She possessed a level of maturity that I wish I saw more frequently IRL. Perhaps her prior marriage helped her to see what Haakon himself could not. He breaks my heart toward the end of the book, but that makes me even more excited to see him potentially redeem himself. (I'm assuming the second book in this series will be dedicated to him as one of the main character.)

- She didn't know what to make of all this, but it landed in her heart in that lonesome place called bitter and sweet.