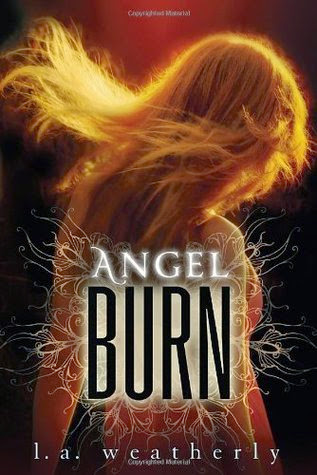 Source: Borrowed from my friend Paula

Goodreads description--They're out for your soul.
And they don't have heaven in mind...

Willow knows she's different from other girls, and not just because she loves tinkering with cars. Willow has a gift. She can look into the future and know people's dreams and hopes, their sorrows and regrets, just by touching them. She has no idea where this power comes from.

But the assassin, Alex, does. Gorgeous, mysterious Alex knows more about Willow than Willow herself does. He knows that her powers link to dark and dangerous forces and that he's one of the few humans left who can fight them. When Alex finds himself falling in love with his sworn enemy, he discovers that nothing is as it seems; least of all good and evil.

My friend Paula wasn't quite finished with the paperback I loaned her, so she let me borrow her Kindle a little longer insisting that I read Angel Burn. And so I did. 3 books finished in one week...that's quite a feat for me what with a full-time job and all. But I managed, and I'm proud of myself. I have unofficially set a goal of finishing at least one book a week for the year, meaning 52 books this year. And so far I'm pretty much right on it. Now...back to Angel Burn.

From the beginning, I was pretty hooked. Obviously I finished it quickly. Alex and Willow had me hooked and I was rooting for them the entire way. Once we got to about the 75% completed mark things were starting to get a little extra cheesy for my taste--and honestly, I'm typically a fan of cheese. It wasn't so much that I was majorly turned off or anything, just one of those things that get noted and then moved past. At about the 85% completed mark, I found that I was okay with putting the book down and didn't exactly feel the burning need to press forward and finish as soon as possible. But I knew I wanted to finish it this weekend so I pushed forward.

Angel Burn is the first in the series and the ending was left wide open for the second book--though there was no real cliffhanger.

I liked the different spin on angels that this book provided. It wasn't the typical angel book that you might see and so I give major points for originality. The characters were somewhat repetitive in what they said to each other...and that was a smidgen annoying, but nothing to be dwelt upon. No major plot twists that were unexpected. But still, quite a solid read and I think you should check it out.

Have you read Angel Burn? What did you think? Let me know!

Posted by Somewhere Only We Know at 6:01 PM