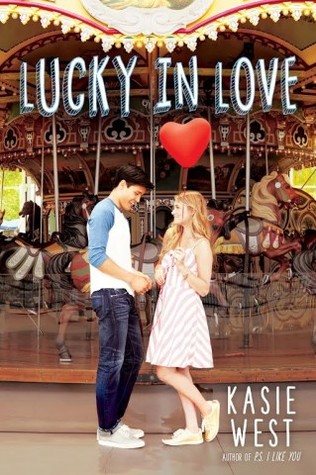 Goodreads description--Maddie doesn't believe in luck. She's all about hard work and planning ahead. But one night, on a whim, she buys a lottery ticket. And then, to her astonishment -- She wins!

In a flash, Maddie's life is unrecognizable. No more stressing about college scholarships. Suddenly, she's talking about renting a yacht. And being in the spotlight at school is fun... until rumors start flying, and random people ask her for loans. Now, Maddie isn't sure who she can trust.

Except for Seth Nguyen, her funny, charming coworker at the local zoo. Seth doesn't seem aware of Maddie's big news. And, for some reason, she doesn't want to tell him. But what will happen if he learns her secret?

With tons of humor and heart, Kasie West delivers a million-dollar tale of winning, losing, and falling in love.

This was the last of Kasie West's currently published books that I needed to read. I requested it for review before it published but didn't get approved so Husband bought it for me for Christmas. As with all of Kasie West's books, the subject matter is clean and there is no language. She is proof positive that you don't have to write about sex and characters that curse every other word to produce a good book.

Lucky in Love is the second book that I've read about a young adult character winning the lottery. The other was Windfall by Jennifer E Smith. And I definitely preferred Lucky in Love out of the two.

Maddie has been working hard to plan for her future and college. Her father lost his job three years ago and her family has been struggling financially and emotionally ever since. The financial burdens have put pressure on all of the members of her family so when Maddie wins the lottery she expects all of their problems to just be solved. Yet money brings it's own problems and everyone (those close to Maddie and those she's never even met before) now seem to want something from her.

I really loved Maddie and I thought her personality was perfect for this storyline because it wasn't what I would have expected. Normally you expect someone who wins the lottery to just go spend crazy, and Maddie does make some large purchases, but she's much more pragmatic and slow to spend than you would expect. Maddie's hard work is part of who she is, but understandably winning the lottery is quite distracting.

Of course, once you have a ton of money people come out of the blue wanting something from you and Maggie learns that not everyone is honest or trustworthy. I did enjoy the secondary characters. Maddie's two best friends were great and I appreciated them for how different they were from each other and from Maddie. Although she and Blair were very similar. Maddie's parents' struggles and arguments felt so authentic to me, but at times their points of view seemed to blur and it wasn't always clear who had what issue. Maddie's brother was a jerk but more along the lines of what you might expect from someone who comes into a large sum of money without working for it. And I actually really appreciated what Kasie West decided to do with Trina's character, but I don't want to say more than that.

And then there's Seth. I adored Seth. Just as a person. As a character. I do have to say that how he felt about Maddie wasn't always clear. I think Kasie West wrote him that way intentionally, because Maddie doesn't always know where Seth stands either. It reminded me of how I often had a crush in high school and the other person flirted with me, but it seemed they flirted with others too so it was hard to tell if they were just friendly. While I was rooting for Seth and Maddie, this did keep me a little more emotionally distant than I typically prefer.

Lucky in Love was just the cute, fun, clean book that I needed at the moment that I read it. I can always count on Kasie West to do me a solid. That being said, even though I did enjoy Lucky in Love, I wasn't completely blown away. Lucky in Love gets 3.5 Stars. Have you read Lucky in Love? What did you think? Let me know!