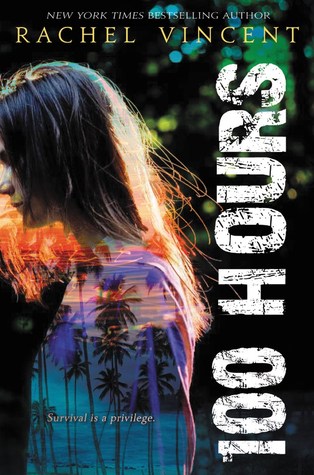 Maddie is beyond done with her cousin Genesis’s entitled and shallow entourage. Genesis is so over Miami’s predictable social scene with its velvet ropes, petty power plays, and backstabbing boyfriends.

While Maddie craves family time for spring break, Genesis seeks novelty—like a last-minute getaway to an untouched beach in Colombia. And when Genesis wants something, it happens.

But paradise has its price. Dragged from their tents under the cover of dark, Genesis, Maddie, and their friends are kidnapped and held for ransom deep inside the jungle—with no diva left behind. It all feels so random to everyone except Genesis. She knows they were targeted for a reason. And that reason is her.

Now, as the hours count down, only one thing’s for certain: If the Miami hostages can’t set aside their personal problems, no one will make it out alive.

I read the description for 100 Hours when I decided to request it for review, but that was months before I actually picked it up to read it. I like to do this on purpose because reading the description initially helps me decide if I think I'll enjoy the book, but not reading the description again helps me to go into the book with low expectations and as little knowledge as possible. Most of the time having as little knowledge as possible gives me the best reading experience, but sometimes I remember the initial description flat out incorrectly. And that's sort of what happened to me here. I remembered that Genesis, Maddie and their friends get kidnapped, but I thought I remembered them being kidnapped to be thrown into human trafficking or bought and sold as sex slaves. And yeah, that's not what happens at all. In this case all my misremembering caused me to do was look for clues that weren't there resulting in highlighted passages I thought might be foreshadowing...but weren't. Either way, 100 Hours was still a thrilling and mysterious ride.

Maddie and Genesis couldn't be much different. Genesis is all extravagance. Her friends are extravagant. They don't seem to care about much else besides fancy clothes, parties, and fulfilling their desires in the moment. Maddie is more reserved. Her parents aren't rich like Genesis's. She wears discount clothes. And she has diabetes so all of her food and activities need to be regulated and balanced. Genesis and Holden are together, but that doesn't stop Genesis from hooking up with other guys or flirting. And Holden turns a blind eye. They have the opposite of a healthy relationship. Maddie's never really had a boyfriend. Yet Maddie and Genesis both have something in common. They're cousins who have both lost a parent. Genesis lost her mother when she was young. Maddie lost her father within the last year.

The beginning of 100 Hours was slow for me. I wasn't excited about or connecting with Genesis or her friends. Maddie was much easier to relate to even though she could be a tad negative at times. The partying and following every whim that Genesis seemed to have was a little drawn out for me, but all of this was necessary to really establish the characters involved in this story and their personalities. Once the kidnapping actually took place, the events and intensity began to pick up to the point where I couldn't put this book down. It was the definition of a "page turner" for me. The closer I got to the end, the more I realized that this wasn't the end. Apparently, the other thing I misremembered about 100 Hours is that it is the first book in a series. I was expecting it to be a standalone. Yet I knew there was no way things were wrapping up completely with the events right at the end of the book. That being said BRING ON BOOK 2!

Even though Genesis was hard for me to connect with in the beginning of this book, she easily won be over with her skills her father spent years teaching her. She knows how to analyze a situation, she knows Krav Maga, and when push comes to shove, Genesis will do everything she can to make sure as many of the captives (and anyone else in danger) as possible survive. I appreciated the dynamics going on with her. How she does start off as this spoiled princess that runs about doing whatever she wants whenever she wants and everyone else just follows her without much say--happy to be included in her schemes. Yet she experiences betrayals on multiple fronts and still finds a way to connect to someone beyond the issues she should have and the betrayal she's experienced.

Maddie, though easier for me to like, was just as complex as Genesis. She's still grieving over the recent loss of her father, and she's not a huge fan of following after Genesis and her friends, but she learns how to stand up for herself, to survive despite her grief doubling in Columbia. She also experiences betrayals, but finds a way to rely on others to do her best to save her cousin.

Other than Luke and Indiana, I wasn't impressed with the side characters. While they all appear to be as complex as Maddie and Genesis, I just couldn't like them. Silvana, Holden and Penelope are downright awful. Neda and Nico aren't enjoyable either, but not as bad as the other two. Dominica and Rog were essentially just there. And really Sebastian was one that I just couldn't figure out completely throughout most of the book.

I'm not going to discuss the events of the book as I don't want to risk spoiling anything.

Favorite quotes (I didn't realize there were so many great quotables until I started typing them):

-The problem with being given everything in life is that you grow up thinking you can take whatever you want, whenever you want it.

-"Money is such a petty reason to ruin someone's life." "Not for those who can't afford food and shelter,"...

-"Who are you trying to be?" I mumble as I trudge past him. "Prince Charming, or Cinderella's horse and carriage?"

-"...let me give you the SparkNotes version of Hookups for Dummies: if you start out as someone's dirty little secret, that's all you will ever be."

-"I know because you are the moon, not the tide."

-"You don't roll with the flow, Genesis, you create the current. And Holden is nothing but a boat bobbing on the waves."

-"Why did you wait so long?" I whisper. "Because you should never rush a good thing,"...

-"Sometimes being stupid looks like being brave." "Maybe," Indiana concedes. "But cowardice always looks like what it is."

There were moments in 100 Hours when I wondered if Rachel Vincent was trying to write some political statement into this book. I don't enjoy when I get even an whiff of something like that. I don't mind if the characters learn a lesson--even if it is political--but I don't want to ever feel like an author is trying to teach me as the reader a lesson--political or otherwise. Dancing between the two is a fine line with very little gray area. In the end, I wasn't overly bothered, but it was enough for me to take note.

100 Hours was a fast paced read for me once I got past the initial kidnapping. I was intrigued by all of the different pieces of the puzzle and the motivations behind everyone's behavior. I was dying to know if/how the characters were going to make it out. Would they survive? Would they escape or would they be rescued? I'd definitely recommend 100 Hours and I'm giving it 4 Stars. Have you read 100 Hours? What did you think? Let me know!