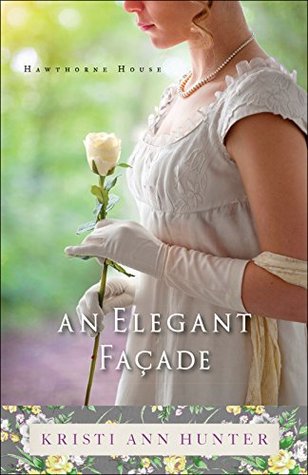 Goodreads description--Lady Georgina Hawthorne has worked tirelessly to seal her place as the Incomparable for her debut season. At her first London ball, she hopes to snag the attention of an earl.

With money and business connections, but without impeccable bloodlines, Colin McCrae is invited everywhere but accepted nowhere. When he first encounters the fashionable Lady Georgina, he's irritated by his attraction to a woman who concerns herself only with status and appearance.

What Colin doesn't know is that Georgina's desperate social aspirations are driven by the shameful secret she harbors. Association with Colin McCrae is not part of Georgina's plan, but as their paths continue to cross, they both must decide if the realization of their dreams is worth the sacrifices they must make.

I've read this series all out of order. I read An Uncommon Courtship (book 3) first, then A Noble Masquerade (book 1), then A Lady of Esteem (novella 0.5), and now An Elegant Facade (book 2). Reading these out of order hasn't bothered me. I'd obviously recommend reading them in order, but sometimes you just do what you have to do. The characters are connected and obviously if you read book 3 first then you can figure out how books 1 and 2 ended, but that didn't prevent me from enjoying the journey of any of these books.

Prior to reading An Elegant Facade, I've read a series of fantasy books with a few contemporary ones mixed in here or there. The book I read immediately before this was almost 700 pages and while really enjoyable it was mentally draining. I picked this book up for the contrast in genres from the previous books I've read. And it perfectly fit the bill for what I needed at the time.

I didn't love Georgina when I read A Noble Masquerade. She seemed so spoiled and bratty. We learn that there's much more to the story and appearances in An Elegant Facade than meets the eye. Georgina has a secret that she's been keeping from her family and she feels that marrying someone who's pride and reputation will keep her own in tact should her secret come to life. This means her search for a husband is entirely void of any emotional connection she might feel. Instead she's looking at titles and popularity as the sole criteria for her selection. This makes her a bit cold and calculating to everyone around her.

Colin is a businessman from Scotland. While at home he would be considered a catch, in London Colin is merely a member on the fringes of society tolerated because of his ability to make a lot of money for many of the families and men of high standing. As such, Colin is extremely observant and used to remaining mostly unnoticed. He's utterly put off by Georgina's obvious social aspirations, but he keeps finding himself crossing paths with her. But as he's observant, he eventually discovers Georgina's secret, and he becomes an ally of sorts.

I loved the transition from irritation and annoyance between these two to reluctant allies while noticing things about each other that no one else seemed to pick up on to finally realizing that feelings had changed from friendship to admiration to more. The slow build between these two made them easy to love. Their banter was great, and I loved that Colin always seemed to have inside information that Georgina didn't have access to. It made him always one step ahead of her and that drove her crazy as she tried to orchestrate every aspect of her life. I did wonder early on how in the world these two would end up together based off their early thoughts and opinions of each other. So for Kristi Ann Hunter to pull that off was impressive.

This is a Christian book so there is mention of God as well as a moral throughout the book with the heaviest focus of this within the last 20-30%. I don't feel as though a non-Christian or someone who doesn't enjoy this genre should be put off by this because the book didn't come off as preaching to the reader to me. It truly felt genuine to the story as Georgina herself struggles with her relationship with and understanding of God.

-"Have no fear, little angel, I am an official guest. Though I believe I am supposed to be dancing with the wallflowers, not the Diamonds."

-It would take a beautiful woman, both inside and out, to entice him to marry. He refused to allow his marriage to be nothing more than another business transaction.

-"Trust God to give you what you need when you need it. If you get it too early, you might misplace it."

-"A bit of advice? You need to learn to evaluate the whole game, not just the cards in front of you."

-"You look good in green." Daft man. "Perhaps you should consider spectacles. I'm wearing white." "Ah, yes, but the jealousy has livened your complexion." The absolute gall of the man infuriated her. "Why would I be jealous?" "Because you've lost." Georgina looked at the table. Each couple had two stacks of cards in front of them. "We appear evenly matched at the moment." "Then you aren't looking closely."

I almost forgot to mention that An Elegant Facade does pick up before the events of A Noble Masquerade are finished. I found this aspect interesting as it added another layer of depth to the story I enjoyed in the prior book. But as Kristi Ann Hunter pointed out in her Author's Note at the beginning of the book, Georgina's story begins during the same events as Miranda's. As the Season begins both girls have different parts to play. It wasn't just a repeat of Georgina's intentions toward Ryland, but also where her first several encounters with Colin occur. That makes it essential to her overall story. So if you've read book 1 and find yourself feeling like the beginning of this book is just a repeat, please press on.

An Elegant Facade was just the book I needed to follow up a heavy and lengthy fantasy series. The historical fiction genre and the mix of the Christian aspects were refreshing. I loved the slow build between Georgina and Colin. I especially loved Colin in general. His upstanding character despite not being at the height of social standing. His moral compass. His desire to protect and even rescue Georgina from her secret and herself. His friendship with Ryland and even Trent and Griffith. I appreciated Georgina's unique struggles. That's one thing I've appreciated in general about Kristi Ann Hunter's take on this time period--there's always some aspect that I just don't expect (Ryland's job in book 1 and Georgina's secret here). An Elegant Facade gets 4 Stars. And one of the best recommendations that I feel like I can give is that I actually see myself re-reading this series at some point in the future. Have you read An Elegant Facade? What did you think? Let me know!