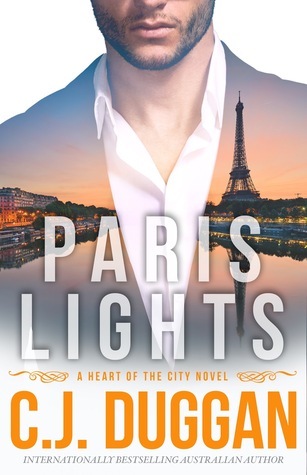 Goodreads description--'You're breaking up with me!' He was silent. 'In Paris.' Eyes dropping. 'Under the Eiffel-[...]-Tower!' I screamed.

Twenty-five-year-old Claire Shorten had looked forward to spending a romantic weekend in Paris for as long as she could remember, and now it was here - three blissful days of strolling through cobbled streets arm-in-arm with her beloved, eating copious amounts of baked goods and soaking up the culture through each and every pore of her body. Well, at least, that was how she'd pictured it . . .

Even after her boyfriend dumps her rather unceremoniously in the most romantic place on earth, Claire is determined not to give up on her dream altogether - with or without a boyfriend. She finds herself a job in the kitchen of a small hotel; Michelin-starred it most certainly is not, but somehow Claire makes a place for herself amidst the dirty dishes and the foreign misfits who run the place.

When the restaurant attracts the attention of the enigmatic - if not slightly terrifying - tycoon Louis Delarue, and Claire manages to survive his high-powered business luncheon from hell, she knows that she can survive anything, surely. But all bets are off when Louis makes a game-changing decision: he's coming back for a second course . . .

I picked up Paris Lights because I'd just read three fantasy books--two of which were extremely slow paced and took me the majority of the month to read. I wanted something that would hook me and that I could read quickly. And that's exactly what happened. I read the first 30% and then basically finished the rest of the book the next day.

The description is a little deceiving. Claire does get dumped by her boyfriend, and she does find a job in the kitchen of a small hotel. But the hotel is more the focus than the kitchen. And Claire pitches in all over the hotel, from manning the reception desk to washing dishes. But the reason Claire pitches in is because the hotel needs saving and Cecile (the owner/manager) gave her a place to stay when her boyfriend dumped her and she decided to stay in Paris. Cecile has managed to get one of those reality TV shows--think Restaurant Impossible or Kitchen Nightmares or I guess Hotel Impossible if such a show existed--to help her save the hotel.

And like Robert Irvine or Gordon Ramsay, Louis Delarue has a tough outer shell. Louis tends to come into a hotel or restaurant and rip the food, accommodations, and staff to pieces. Most people seem to be terrified of him. The problem is that he expects perfection. He has high standards of people. It takes a lot to earn his respect, but when you've gotten it you know that you've earned it. Of course this doesn't sit well with all people and Claire starts off with an intense dislike of Louis. Sure he's attractive physically, but not the way he treats people. And so she challenges him to behave differently. The problem is...she only sees what's on the surface. Beneath is a passionate and generous man. I really appreciated how Claire's opinion of Louis changed rather slowly. And they built their relationship upon shared experiences rather than physical attraction. Of course things do get physical, and CJ Duggan was fairly graphic when things got there. Yet overall there weren't many scenes in the book of this nature.

I felt like some pieces could have been explained better. Like how and why Louis ended up choosing the Hotel Trocadero as one of his project hotels in the first place. Claire's actual duties in the hotel and with the project were vague at best and could have been flushed out more. Just a few issues like that. The only highlights I made were a couple of overused phrases.

Overall, Paris Lights was exactly what I expected--a quick, fun, light read. I read the first 30% quickly and was hooked after that. There was some language and physical scenes, but neither were excessive throughout the book. Paris Lights gets 3.5 Stars. Have you read Paris Lights? What did you think? Let me know!