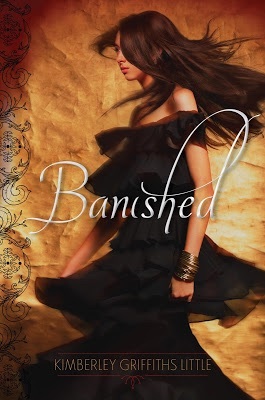 After spending months traveling the harsh, unforgiving Mesopotamian desert, Jayden reunites with a broken, injured Kadesh. Although everyone was convinced the violent and unpredictable Horeb, Jayden’s betrothed, killed the handsome prince, Jayden knew in her heart that her love was alive and safe. But their reunion is short-lived, as they learn Horeb is on their trail and determined to take back the girl he has claimed. Soon, the two star-crossed lovers are on the run toward Sariba, Kadesh’s homeland, where, as heir to the Kingdom, he plans to make Jayden his princess.

But the trek to Sariba is fraught with heartache and danger. After narrowly escaping being stoned to death for a crime she didn’t commit, and learning that her sister has disappeared, Jayden’s only solace is her love for Kadesh. But even he is keeping secrets from her . . . secrets that will change everything.

This gorgeous and enchanting sequel to Forbidden, is full of love, danger, and heated passion that will leave readers breathless.

I put off reading Forbidden because I'd seen some negative reviews about it. Because of the negative reviews, I started Forbidden with really low expectations. And I think it's because of my low expectations that I ended up enjoying Forbidden as much as I did. And well Forbidden ended with a cliffhanger that left me actually anxious and excited to get to Banished. Yet my experience is nearly the opposite when it comes to Banished.

When I re-read my review of Forbidden, I was reminded that Jayden did make some decision that I felt weren't the brightest and conflict seemed to be written in for the sake of conflict, but this didn't happen until the last 70% of that book. On the other hand, Banished felt like it began (and persisted) in this direction for me. Jayden was annoying me from almost the very extreme beginning of Banished. She'd just fled for her life from Horeb and the city they were in after trying and failing to talk her sister Leila into joining her. Yet no sooner does she arrive back in the land of Edom and finds safety that she's devising her plan to head BACK into danger, back to the city she just left, and back to try to beg her sister to come with her. I just felt like she'd just tried and failed at that so why turn around and do it again. It's not her fault that he sister is an absolutely moron. Jayden can't make Leila leave the temple and her chosen life of prostitution any more than Horeb can force Jayden to marry him. So I really just felt immediate frustration with Jayden from the very beginning of Banished.

Also, Jayden just realizes that while she might love Kadesh, she doesn't know everything about him. His family, his home, the politics of his land, his past, other potential suitors. She knows nothing. But instead of trusting Kadesh as he's given her no reason not to, she goes into a place of insecurity and distrust. Plus while they're trying to run for their lives, she's demanding answers. He tells her that he'll discuss things with her in due time, and now is not the appropriate time, yet that doesn't seem to actually sink in with her. It just caused me to roll my eyes when she reacted the way that she did.

Part of the downfall of my reading Banished was that I put it down to read Morning Star by Pierce Brown when it released. Morning Star is in a league of its own and the difference between Pierce Brown's writing and Kimberley Griffiths Little was a stark contrast. While Pierce Brown's writing is full of twists that you never see coming, all I felt in reading Banished was a sense of doom over the conflict and "twists" that were headed in the direction of the characters that was no more subtle than a bull in a china shop. Jayden is constantly musing about an "unknown threat" that she sense and can't put her finger on so that puts the reader on their toes at all times looking out for these dangers. Whereas, in Morning Star I knew twists were coming because of what I'd experienced with Pierce Brown's writing up until that point, yet I had no idea what those twists would be and the characters didn't constantly wonder about these unknown threats either. It was more a matter of "showing" versus "telling" when it comes to writing styles if that makes sense.

All of those frustrations combined caused me to keep putting Banished down in favor of reading something else. Every time I put Banished down, I had full intentions of coming back to it and finishing. I hate making it so far into a book only to determine that I don't plan to finish it. Ultimately, I made it 54%. When I realized that my reading time has become so limited that I only finished two books each in the months of March and April I decided that I just don't want to spend that little reading time on a book that I can't wait to put down in favor of something else. If this were any other time in my reading life, I'd probably keep going. And who knows, I might have ended up enjoying Banished, but as things stand now, I've decided to DNF Banished at 54%. I hate to do it, but I feel the relief already just from having made the decision, and that's how I know I'm making the right call. Have you read Banished? What did you think? Let me know!