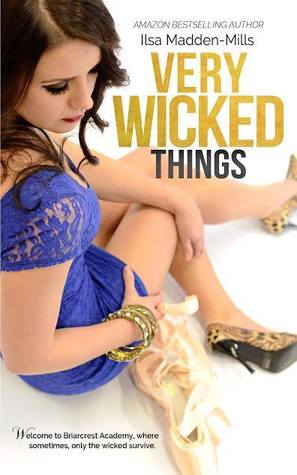 Goodreads description--Born on the poor side of town...

Ballerina Dovey Beckham is a scholarship student at Briarcrest Academy, determined to prove she’s more than just a girl with the wrong pedigree. She does whatever it takes to succeed in her endgame, even if it means surrendering her body…but never her heart.

Until the day she meets him, and he rips apart all her well-laid plans. Suddenly, the girl everyone thought unbreakable might just shatter.

Born into wealth and privilege...

Cuba “Hollywood” Hudson is rich, spoiled, and a star football player. With his fast cars and superficial girlfriends, he lives the high-life, hiding his secrets from the world.

Until the day he meets her, and she offers him something he’s never tasted... love.

But once in a lifetime kind of love doesn’t come easy. When trust crumbles and doubts creep in, both will have to decide to either love or let go... forever.

Welcome to Briarcrest Academy, where sometimes, only the wicked survive.

I don't have too much to say about Very Wicked Things, but I did want to make a few comments. I really liked how Dovey and Cuba have an entire history before the start of Very Wicked Things. Granted we do get most of their backstory in the form of flashbacks which I don't always love, but I did really like how we were thrust into the middle of their mess of a relationship rather than starting at the very beginning.

Cuba had a lot of moments that could have induced severe eye rolling. The way he pushes Dovey away and how he uses girls and sex as an escape. The way he treats Dovey isn't in any kind of way excusable even though there is a reason.

Dovey also had her moments. Despite being treated like dirt she can't stop caring for Cuba. I respect her ability to forgive, but still. Also, I struggled with her own decisions in the name of protecting those that she cares about.

*Note: There were sexual situations, but not too terribly many and not in as much detail as some new adult books. Obvious language was present as well. Just an FYI.