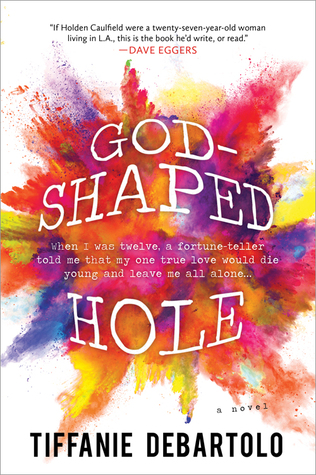 Published: May 16th 2017 by Sourcebooks Landmark

"With wit and humor, the author brings these characters and their quirky, artsy friends alive. Bottom Line: You'll dig it" -- People

When Beatrice Jordan meets the unpredictable Jacob Grace, the two wild souls become instant allies. Together they discover an escape in each other's creativity and insecurities, while running from secrets they cannot seem to shake - or a fate that could throw them to the ground...

This 15th Anniversary reissue of Tiffanie DeBartolo's classic love story introduces a new audience of dreamers to a quintessentially real and raw vision of spirit, and inspires everyone to live -- and love -- as vividly as possible.

I have to admit that with a title like God-Shaped Hole I hoped for and expected a bit more of a positive religious, potentially even Christian, book. This was not that. There was nothing in the description to indicate that would be the case, but there was nothing to indicate it would not be as well. So just in case the title gives you any misconceptions, now you know.

Beatrice uncharacteristically answers a personal ad in the newspaper that was uncharacteristically placed by Jacob. Beatrice couldn't imagine any of the guys she's dated in the past placing anything remotely similar to Jacob's ad. The two hit it off immediately. Some might take issue with the insta-love-ish vibe. Granted time does pass before the two claim those feelings, but there's definitely an insta-connection. Things definitely get physical quickly.

I kept forgetting that Beatrice and Jacob were essentially 30 years old. Their behavior reminded me more of late teens/early 20s for sure. Especially Beatrice's thought processes as she's the narrator. Speaking of...both are flawed characters, but Beatrice kind of got on my nerves. She didn't bother me as much while I was reading, but when I would put the book down and think about it I realized how frequently she irked me. She has a tendency to see mostly negative in other people, and even though I've been that way at one point in my life, I've learned that it's so much happier for me and for others to offer grace to others for things that might get on my nerves. I realized that I didn't want others to think of me the way I often thought about them. I wish Beatrice had learned that lesson because it was draining to read so much negativity. She was also highly irrational at times. And the emotional and mental games that she would play with Jacob were immature and exhausting at best. Her issues were understandable and felt real given her background, but still draining. Jacob wasn't without issues as well, but he didn't bug me as much. Perhaps this is because he wasn't the narrator, and I wasn't subjected to his thought processes.

Considering I expected The God-Shaped Hole to have some spiritual message, you can imagine my disappointment when Beatrice has nothing but contempt for God. Her view of Him is so incredibly small. If God were truly as she saw Him, I could understand her feelings, but He is so much more. The idea that the characters (or author) put forth that everyone has a "God-shaped hole" that they try to fill with anything and everything yet it has nothing to do with God goes against my core beliefs as a Christian. Of course, a "God-shaped hole" could only be filled by God Himself. And not the mini-unGod-like version that Beatrice imagines.

Despite my frustrations with Beatrice as a character and my issues with the weak vision of God, I read this book extremely quickly--especially considering I've been in a reading slump. Another bonus was that God-Shaped Hole did make me cry.

-Sometimes the most consequential moments in my life originate from a state of completely witless human auto-pilot.

-"It's not a good sign when your girlfriend's a heroin addict and you don't even know it."

-"Henry Miller wrote something about fear making you fearless. It's a very powerful emotion. Use it to get what you want. I mean if it's going to rule your life, it might as well rule you to freedom, right?"

-"Committing suicide so as not to be murdered is the worst reason I've ever heard of to die."

God-Shaped Hole wasn't at all what I was expecting. The writing was pretty great, but I struggled a little with Beatrice as a character as well as her view of God. Yet at the same time, I couldn't seem to put it down. I was leaning toward 3 Stars until the ending had me all in tears. God-Shaped Hole gets 4 Stars. Have you read God-Shaped Hole? What did you think? Let me know!