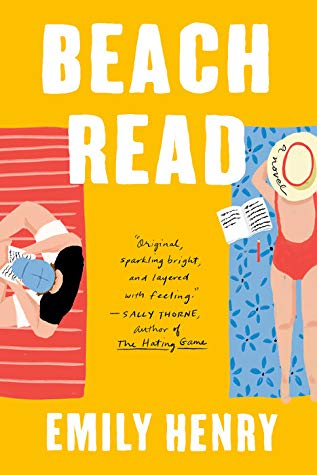 Expected Publication: May 19th 2020 by Berkley

Goodreads description--A romance writer who no longer believes in love and a literary writer stuck in a rut engage in a summer-long challenge that may just upend everything they believe about happily ever afters.

Augustus Everett is an acclaimed author of literary fiction. January Andrews writes bestselling romance. When she pens a happily ever after, he kills off his entire cast.

In fact, the only thing they have in common is that for the next three months, they're living in neighboring beach houses, broke, and bogged down with writer's block.

Until, one hazy evening, one thing leads to another and they strike a deal designed to force them out of their creative ruts: Augustus will spend the summer writing something happy, and January will pen the next Great American Novel. She'll take him on field trips worthy of any rom-com montage, and he'll take her to interview surviving members of a backwoods death cult (obviously). Everyone will finish a book and no one will fall in love. Really.

I just wasn't sure about this one when I requested it. The cover is that stinking animated trend that I really dislike. I don't always read adult books due to potential content, but I've learned that just because a book is labeled adult doesn't mean it has to include graphic content. I'm not familiar with this author (although I am interested in looking into her other books). But the description had a few things going for it that pulled me in. I loved that both main characters are authors, and I also liked their bet/challenge about stepping out of their normal genres to write something different.

January is disillusioned. Her father recently passed away, and on the day of his funeral she found out that he'd had an affair while her mother was fighting cancer. And her long-term boyfriend couldn't handle her journey through grief and betrayal. Struggling with writing anything romance-driven, she's in a financial bind as well. So January moves temporarily into her father's lake house to empty it and sell it...while also writing a book.

January quickly realizes that her next-door neighbor is Gus Everett who she went to college with. Back then, Gus repeatedly criticized her writing because of her perpetual happy endings. He also chose to only critique her during class which caused a lot of resentment. Yet there's always another side to the story.

I loved the insight we're given into the writing and even briefly into the publishing process. This isn't too detailed. It didn't take over the story, but I think Emily Henry included just the right amount of both the story January was writing and the process itself.

Gus was endearing. He's awkward. He sees the world in a darker way than January does. Yet he's drawn to her light. There was not much that I didn't like about Gus.

I don't always address this because I feel like I would be repeating myself in 90% of my reviews, but there were certainly many moral decisions in this book that I don't personally support. My thoughts on many of these things the majority of our country would consider outdated, but that doesn't change the fact that I hold to a different moral standard than the average American (or so it seems these days).

-It wasn’t that I couldn’t get enough of him. Or that he was the best man I’d ever known. (I’d thought that was my dad, but now it was the dad from my favorite 2000s teen drama, Veronica Mars.) Or that he was my favorite person. (That was Shadi.) Or because he made me laugh so hard I wept. (He laughed easily, but rarely joked.) Or that when something bad happened, he was the first person I wanted to call. (He wasn’t.) It was that we met at the same age my parents had, that the snowball fight and impromptu road trip had felt like fate, that my mother adored him. He fit so perfectly into the love story I’d imagined for myself that I mistook him for the love of my life.

-Anger with all the broken parents, heartache that they too must’ve felt like kids—helpless, unsure how to make the right decisions, terrified of making the wrong ones.

-“You don’t believe in any kind of internal moral compass.” The way he said it made it seem as if he himself did believe in such a thing, which would’ve surprised me a few weeks ago, but now made perfect sense. “Maybe you start out with that,” she said, “But if you do, it gets shaped as you age. How are you supposed to believe right’s right and wrong’s wrong if everyone around you says the opposite? You’re supposed to think you’re smarter than all of them?”

-“You don’t know the difference between pity and sympathy,” I said. “I’m not pitying you. It makes me sad to think of you being treated like that. It makes me mad to think you didn’t have the things all kids deserve. And yeah, it makes me mad and sad that a lot of people go through the things you went through, but it’s even more upsetting because it’s you. And I know you and I like you and I want you to have a good life. That’s not pity. That’s caring about someone.”

-You make beautiful things, because you love the world, and maybe the world doesn’t always look how it does in your books, but … I think putting them out there, that changes the world a little bit. And the world can’t afford to lose that.”

These quotes remind me of a few things I want to mention. The second quote is a reminder that I now read from a parental figure's point of view just as much as the main character. I can't turn it off. The third reminds me that I can't base what I believe to be right or wrong upon myself or anyone else or even a large collection of others. God's Word will always be my moral compass. I have and will fall short. But I at least have a guide that does not waver. The fourth is a pet peeve of mine. Characters in books often disdain what they perceive as pity, but sympathy is usually what's being extended to them by people who care. And those people don't have to be in their close inner circle to care. For the last quote, I fancy seeing myself writing a book one day. And if I ever do, I hope that my characters or my world might not be realistic so much as hopeful or portrayals of what can be.

Beach Read was much better than I expected it to be. I really enjoyed the process of the relationship between Gus and January. I appreciated her journey through grief and beginning to heal. I also liked the information surrounding writing, the process, and the publishing side we get to see. I do have to say that I didn't love the information dump in the form of letters January's father wrote to her before he died. Beach Read gets 4 Stars. Have you read Beach Read? What did you think? Let me know!