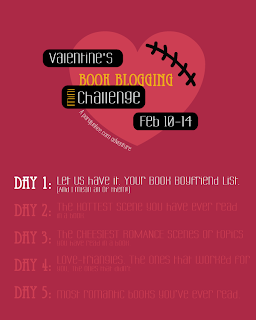 Parajunkee did a Valentines Day Book Blogger Challenge, but I totally missed out on getting to post while it was going on. However, I love a couple of her topics so much that I wanted to post my answers to those anyway. Today's topic is all about love triangles. The ones that worked for me and the ones that didn't. Bear with me because this is going to be fairly lengthy.

****There will be spoilers for the books listed below. Proceed with caution.****

The Ones that Worked

Rose/Dimitri/Adrian – This one worked for me because even though I was rooting for Rose and Dimitri to end up together, I still wanted Adrian to have his own happy ending. When the author can make me root for the third wheel while also rooting for the main couple…well that usually (though not always) makes for a successful triangle.

Meghan/Puck/Ash – This one is similar. I was all Meghan and Ash in The Iron King, but in The Iron Daughter, Ash left me pretty cold and had me changing over to Team Puck. While I haven’t finished reading this series, I’m pretty sure I know how this triangle will end.

Elizabeth/Wickham/Darcy – This triangle works because the reader is just as much blinded by Wickham initially as Elizabeth is. Wickham is nothing if not charming. And he effectively (for a while) turns Elizabeth off Darcy (obviously that's not Elizabeth's only turn-off, but for the sake of today's topic...). He could never have predicted that she would reveal to Darcy that Wickham slandered him. And Wickham was also banking on Darcy being too proud to care what lowly Elizabeth Bennet might think of him.

Stephanie/Ranger/Morelli – Oh how I wish Stephanie would choose between these two. However, I can’t blame her when I find myself just as torn between the two of them as she is.

Blue/Adam/Gansey – When reading The Raven Boys, I was frustrated that there was a prophecy that clearly indicated a hookup between Blue and Gansey, yet, Blue and Adam seem to develop a relationship. However, in The Dream Thieves Maggie Stiefvater started really building up this triangle. Obviously this series isn’t over, but right now I like the direction that it’s headed. Had you asked me before reading The Dream Thieves, this one would have been in the “didn’t work” column.

Samm/Marcus/Kira – There’s a slow change and build for this triangle. The triangle also isn’t the main focus of the series so that helps. While I know who I’m rooting for Kira to end up with (*cough* Samm), I’m also rooting for Marcus as well.

The Darkling/Mal/Strumhond/Alina – This square has been up and down for me. I rooted for The Darkling until I realized there was no redemption for him. I am utterly opposed to Mal, so when Strumhond came into the picture, I jumped onto his bandwagon. Unfortunately, I fear I might end up disappointed with the way this one turns out.

Catcher/Elias/Gabry- This was a great love triangle for me. I was whole heartedly rooting for Catcher. And then the unbelievable happens. Slowly I came around to Team Elias. Another sign of a good love triangle (for me) is when I can pull a completely 180 like this without feeling any residual doubt over my choice. The slow progression is what made this one believable.

The Ones that Didn’t

Clary/Simon/Jace – I didn’t buy it. I expected that truly Clary and Jace wouldn’t be brother and sister. But even if they were, Clary clearly never felt for Simon what Simon felt for Clary. And neither felt close to feeling what Clary and Jace felt for each other. Who wants to be the consolation prize? Who wants to be the one who says “I can’t have who I really want….but you’ll do…I guess….maybe.”

Tessa/Will/Jem – I’m sure this one worked for most people. I mean come on Tessa gets a happy ending with both Will and Jem. But I don’t buy it. It felt like a cop out to me. Being a Will fan, it felt like a betrayal. I loved where The Infernal Devices was headed with Clockwork Prince, but Clockwork Princess was a letdown for me.

Katnis/Peeta/Gale – Katniss is totally up front with Gale about not being on the same page with him as far as feelings go at the beginning of The Hunger Games. Of course, she develops feelings for Peeta throughout the Games, and we actually find out that they have history (albeit small, but history none the less) before the Games. Only after Gale’s life is threatened by Snow does Katniss show any real more-than-friends type feelings toward Gale and turn her back on Peeta. This felt like one of those “It’s always been Peeta,” situations, but she flip flopped based on who was in the most danger.

Bella/Edward/Jacob – I think I’m establishing a pattern. I apparently don’t like love triangles that involve the love of the heroine’s life versus the best friend of the heroine. Jacob never stood a chance. So I don’t even understand how this one became as big of a conflict as it did. 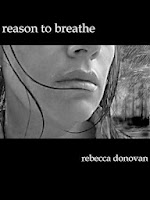 Ashton/Beau/Sawyer – This whole series doesn’t work for me. It’s never a good idea to completely change yourself in order to be with someone. Especially if there’s another option that accepts you for who you are. And how Ashton and Sawyer even ended up together period never made sense to me.

Lena/Alex/Julian – Lena annoyed the snot out of me when it comes to this aspect of the series. She finds out that her mother never really died like she thought she did. She’s spent years thinking that her mother was dead to find out that she’s really alive. She doesn’t actually witness Alex’s death, but yet, she readily assumes that he died in their attempted escape to the Wilds. Julian comes in and I could have bought their relationship if I wasn’t yelling at her that Alex is probably still alive. Of course he is. And then she proceeds to act like a two year old and throw Julian in Alex’s face any chance she gets. She comes off as being angry with Alex when she’s the one who started another relationship.

Jack/Cassie/Chrystle (The Perfect Game by J Sterling not pictured, which I haven't posted my review for yet)- Jack thinks he knocks up Chrystle in a one night stand and drops the love of his life like a sack of potatoes as soon as he finds out in order to be a good dad. I'm not buying what you're selling. Especially considering how he’s planning on marrying someone that he not only doesn’t love but pretty much despises. Even a moron could figure out that such a relationship can only end badly. Plus how do you justifying having an ongoing relationship outside of marriage with someone you pretty much hate? Yeah. This is probably one of the worst triangles ever.

Evan/Emma/Drew/Jonathan- Again. We’ve got the love of your life. You had a misunderstanding. And yet you purposefully seek out another relationship. It’s not going to work. And I can’t root for it. Then despite everything else, Emma is completely oblivious to the potential danger that Jonathan presents to her relationship with Evan. Wise up.

Deamon/Katy/Blake – Was anyone Team Blake? At any point? I just wanted to slap Katy through this stint of the series.

Cassian/Jacinda/Will – I was all for Team Will when I read Firelight, but whenever supernatural/willy-nilly love bonds are forged I find it hard to fight against them. Once Jacinda and Cassian were bounded (aka dragon term for married, but deeper to where they can feel everything the other feels) then I find it hard to believe that Jacinda maintains her independent feelings for Will. After the bounding ceremony I was Team Cassian.

Peter/Alice/Jack – Again…supernatural connection here. I’m pretty sure Amanda Hocking starting her writing career with this series as Twilight fan fiction. So for there to be so many similarities to Twilight is expected. Yet, I think Ms. Hocking played with the concept of what if Jacob had imprinted on Bella. Would that have changed anything? Her conclusion: no. Jack and Alice fight the blood bond that Alice and Peter have in order to end up together. I, however, don’t fight the supernatural bond and wanted Alice to end up with Peter.

Mercy/Flynn/Luke/Paul/Sebastian - Mercy…Mercy. I feel love “triangles” that include more than 3 parties are pretty much ridiculous anyway. Well at least when all of the points lead back to one person. If it were a square with two guys and two girls. Ex: Characters A & B are in LURVE, but character C is trying for Character A and Character D is trying for Character B…maybe. But even that’s pushing it. Mercy finds herself making out and feeling all these feels for MANY guys. Therefore I find her “true love” with Luke even more far fetched.

Zoey/Eric/Heath/Stark/Kalona – Again with the multiple people involved with this mess. Zoey is just as bad as Mercy in bouncing from guy to guy. Now that I think about it, I wonder if the Cambion series is a retelling/spin off/fan fiction based off the House of Night series? Zoey “loves” too many characters in this series for such a short span of time. It’s not believable. Except for showing how much she must not know/understand real love.

Mimi/Jack/Schuyler/Oliver – Jack’s got a supernatural type connection to both Schuyler and Mimi. The whole twin thing was confusing. It would have been harder not to root for Mimi if she weren’t a shallow and hateful person. She made it easy to hate her, but it was confusing that Jack struggled with this. And then when Jack and Schuyler go through a stint of “we literally CAN’T be together,” Schulyer has a brief relationship with her longtime best friend Oliver who is the consolation prize similar to the Clary/Jace/Simon triangle from The Mortal Instruments.

To sum it up, apparently love triangles that work for me are often slow building and take a lot of work on the authors part to have me switch teams when necessary. And love triangles that don't work for me happen when there's a supernatural aspect the characters are somehow able to overcome. You can bet that if the love "triangle" has more than 4 parties then I'm out. Best friend vs. love-of-my-life...love of my life is going to win every time. Consolation prize relationships are 100% doomed to failure. What about you? Did any of these love triangles work for you that didn't work for me? Are there any that I didn't list that you feel strongly one way or the other about? Let me know!