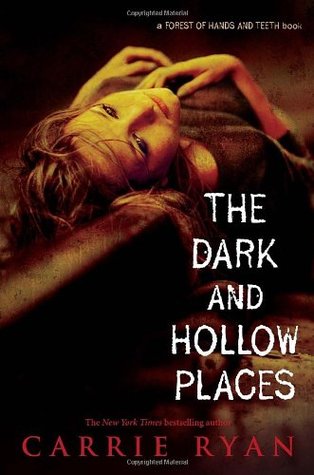 The Dark and Hollow Places (The Forest of Hands and Teeth, # 3)

Goodreads description--There are many things that Annah would like to forget: the look on her sister's face before Annah left her behind in the Forest of Hands and Teeth, her first glimpse of the Horde as they swarmed the Dark City, the sear of the barbed wire that would scar her for life. But most of all, Annah would like to forget the morning Elias left her for the Recruiters.

Annah's world stopped that day, and she's been waiting for Elias to come home ever since. Somehow, without him, her life doesn't feel much different than the dead that roam the wasted city around her. Until she meets Catcher, and everything feels alive again. But Catcher has his own secrets. Dark, terrifying truths that link him to a past Annah has longed to forget, and to a future too deadly to consider. And now it's up to Annah: can she continue to live in a world covered in the blood of the living? Or is death the only escape from the Return's destruction?

I just finished The Dark & Hollow Places by Carrie Ryan. I just love Carrie Ryan. Her writing is beautiful and heartbreaking. It took me a little longer to get into the beginning of this book versus the other two, but looking back I really like the way she leads into Annah's story.

All of my predictions for this book were off except two. I won't tell you what those predictions were, right or wrong, because I don't want to ruin anything for a potential reader. But, I'm stoked that my predictions were off because there's nothing more disappointing than knowing exactly what's going to happen before you even get started. I also really liked the last couple of paragraphs in the book binding the beginning of the story, the essence of The Forest of Hands & Teeth, to the ending.

Posted by Somewhere Only We Know at 9:50 PM