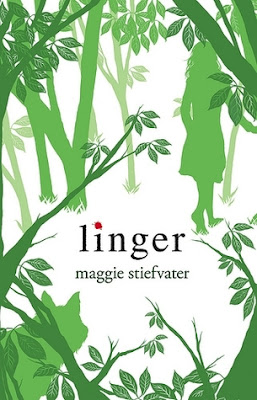 In Maggie Stiefvater's Shiver, Grace and Sam found each other. Now, in Linger, they must fight to be together. For Grace, this means defying her parents and keeping a very dangerous secret about her own well-being. For Sam, this means grappling with his werewolf past . . . and figuring out a way to survive into the future. Add into the mix a new wolf named Cole, whose own past has the potential to destroy the whole pack. And Isabelle, who already lost her brother to the wolves . . . and is nonetheless drawn to Cole.

Ok, so I don’t think I gave Shiver 5 stars, but I’m starting to feel like I should have. I guess I’d be leaning toward 4.9 to 5 for Linger and for the series as a whole thus far.

I very much enjoy the writing style of Maggie Stiefvater. The tone she writes in is beautiful and can be heartbreaking exactly when it should be. I enjoy swapping the narrator in the way that she does. It feels natural, where as other books that I’ve read do this, but have not achieved the narrator swap with the perfection that she has. The voice of the character she chooses to showcase always best fits the situation, whichever is experiencing the scene in the most interesting way is the exact person‘s view she chooses to share with the reader. Continuing with the praise of her writing style, the addition of Cole St. Clair and Isabel’s voices as narrators was also natural and seamless. I was hesitant about this when I first heard they would be additions, but it works so well.

A good portion of the storyline fits in with the real world and that is important to me. I can’t take a book that portrays things as normal—in a semi-normal world—that in no way represent how life is really lived. Grace’s parents don’t believe or understand the intensity behind her relationship with Sam, which I find to be realistic. How many parents would take their child’s first relationship seriously? So many of us have several misses before we hit any where close to the mark. Another realistic aspect of the book is the blow up Grace has with her parents after they find out that Sam’s been spending the night in their daughter’s bed. I had a hard time believing that no matter how absentee the parents that Sam and Grace could get away with sleeping in her bed together every night for so long. So it was appropriate for this to be the catalyst between Grace and her parents’ explosion. The rebellion Grace goes through after her parents’ reaction appears yet again very typical. Despite how unfounded their opinion of Sam, Grace never fully explains why she feels the way that she does and how wrong they are—about Sam’s character in particular. I feel like that’s classic teenage pride—though I can’t imagine myself not vehemently defending my beloved’s honor. It’s a follow up on how adults make teenagers feel like they are idiots and how adults think teenagers believe they know so much more than they actually do. It’s all very believable. One last tidbit about how real this book felt for me…Sam and Grace both have that “miss you while you’re still there” thing going on. I’ve totally felt that before.

Moving into the actual storyline, I was also nervous that with the addition of Cole & Isabel’s voices that we would have a repeat of the exact way that Sam & Grace came together. Forgive me, Maggie Stiefvater, for not having faith in you. It wasn’t personal. It came from being let down by other stories where the characters change names but the overall arch of the story and events remains the same. This did not happen in this book and I loved it for just that reason. Cole and Isabel are their own story. They are their own characters. They are not Sam and Grace, and they stand their ground just the way that they are. SPOILER ALERT: I actually like that they don’t get together in this book. It would be out of character. There is so much pain between the two of them. They need time. They need to heal. And they have to do that alone before they can achieve anything higher than where they are. Cole is learning to let go, learning how to be human again, and Isabel seems to be just trying to keep it together. It would have been fake and completely forced to have them fall madly in love upon first meeting and subsequently solve each others problems and broken hearts.

Sam and Grace. Oh Sam and Grace. I feel certain that Hollywood and critics will talk down about Sam and Grace because they are both so young and are already talking about marriage. Some seem to think it is a weakness to be so in love that you’re broken when they are gone, that you’re unable to function when life threatens to take away your love. They think that makes you weak. I think they are wrong. Perhaps it’s because I was that way myself that I defend this position so adamantly. But all I wanted was to love and to be loved. To hold onto my love with a fist so tight it threatens to snuff out the oxygen for the rest of the world. Sam and Grace are unafraid of loving so deeply that they would be destroyed without the other. I don’t call that weak. I call that strong. Love like there’s no tomorrow.

Posted by Somewhere Only We Know at 7:41 PM 4 comments:

The Girl With the Dragon Tattoo - Review 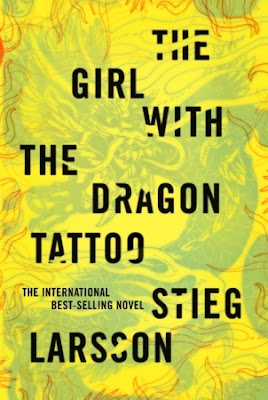 The Girl with the Dragon Tattoo (Millennium, # 1)

Goodreads description--Mikael Blomkvist, a once-respected financial journalist, watches his professional life rapidly crumble around him. Prospects appear bleak until an unexpected (and unsettling) offer to resurrect his name is extended by an old-school titan of Swedish industry. The catch—and there's always a catch—is that Blomkvist must first spend a year researching a mysterious disappearance that has remained unsolved for nearly four decades. With few other options, he accepts and enlists the help of investigator Lisbeth Salander, a misunderstood genius with a cache of authority issues. Little is as it seems in Larsson's novel, but there is at least one constant: you really don't want to mess with the girl with the dragon tattoo.

I finally finished. The beginning of this book was challenging to say the least. After digging further into the story, I understood the necessity of the information presented in the first 200 pages. However, initially pushing through those pages wasn't always easy.

This book was a bit out of my typical genre, but I'm glad I branched out. The story was multi-layered and all of the pieces fit together so nicely. There were definitely disturbing scenes that I wasn't expecting at all. Even though this book is fiction it just goes to show you that there are truly some disturbed, mentally sick people out there. And you don't always know who they are.

I really enjoyed how the story built and built the further you got into it. It didn't wait until the last 100 pages to climax and resolve. It grew in intensity even from the tough beginning. In the same way, I really enjoyed the ending. I'm sure alot of readers will be disappointed with the very end, but I enjoyed that it left me wanting more. That just makes me curious about the next book. I already know that Salander is in both of the other books, but I really hope to see a reappearance of Mikael in the future books as well. We will see.

Posted by Somewhere Only We Know at 9:57 PM No comments:

Sorry I haven't posted in a while. People told me you have to get past the first 150 pages of The Girl with the Dragon Tattoo before it really hooks you. They were right. I've only made it to chapter 2. I've finally met the girl with the dragon tattoo :), hopefully, I'll be knocking it out and posting a review soon.
Posted by Somewhere Only We Know at 2:45 PM No comments: