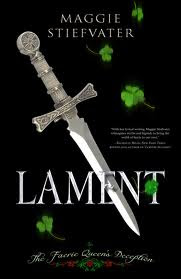 Goodreads description--Sixteen-year-old Deirdre Monaghan is a painfully shy but prodigiously gifted musician. She's about to find out she's also a cloverhand—one who can see faeries. Deirdre finds herself infatuated with a mysterious boy who enters her ordinary suburban life, seemingly out of thin air. Trouble is, the enigmatic and gorgeous Luke turns out to be a gallowglass—a soulless faerie assassin. An equally hunky—and equally dangerous—dark faerie soldier named Aodhan is also stalking Deirdre. Sworn enemies, Luke and Aodhan each have a deadly assignment from the Faerie Queen. Namely, kill Deirdre before her music captures the attention of the Fae and threatens the Queen's sovereignty. Caught in the crossfire with Deirdre is James, her wisecracking but loyal best friend. Deirdre had been wishing her life weren't so dull, but getting trapped in the middle of a centuries-old faerie war isn't exactly what she had in mind . . .

Finding that I don’t have much to say after my review of Beautiful Darkness.

Lament was really good. I was hooked. When I did have to put it down, I found myself always wanting to read more. I read it quickly (Wednesday to Friday). I was excited about the story line and the characters. And even when my sister-in-law presented me with a KindleFire for my graduation present Wednesday night, I couldn’t stop reading Lament to play with my new toy. Must say again, really like Maggie Stiefvater’s writing. Ballad, book 2 is on my Christmas Wishlist and so is The Scorpio Races (her newest book, but not in this series). Again, I’ll repeat what I said at the end of my Beautiful Darkness review. Beautiful Darkness was 503 pages and Lament was 325 pages. So much more happened (or seemed to happen) in Lament than in Beautiful Darkness. Good stuff. Sorry I don’t have more to say at the moment. Check out Lament.

Posted by Somewhere Only We Know at 9:58 AM No comments: 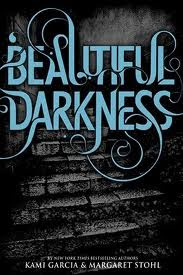 Goodreads description--Ethan Wate used to think of Gatlin, the small Southern town he had always called home, as a place where nothing ever changed. Then he met mysterious newcomer Lena Duchannes, who revealed a secret world that had been hidden in plain sight all along. A Gatlin that harbored ancient secrets beneath its moss-covered oaks and cracked sidewalks. A Gatlin where a curse has marked Lena's family of powerful Supernaturals for generations. A Gatlin where impossible, magical, life-altering events happen.

Together they can face anything Gatlin throws at them, but after suffering a tragic loss, Lena starts to pull away, keeping secrets that test their relationship. And now that Ethan's eyes have been opened to the darker side of Gatlin, there's no going back. Haunted by strange visions only he can see, Ethan is pulled deeper into his town's tangled history and finds himself caught up in the dangerous network of underground passageways endlessly crisscrossing the South, where nothing is as it seems.

Ok…so 2.9 stars. Can’t quite give this 3 Stars because I can’t say that I “liked” it—which is what my 3 Star rating is listed as. But it doesn’t quite feel like a “Really?” either.

Here’s the deal. I read Beautiful Creatures (the first book in this series) last year during the holiday season on a trip to my in-laws' house. I read the entire book in one day. It wasn’t so much that the reason I finished it in one day was because I couldn’t put it down so much as I really just had the opportunity to keep reading, so I did. I think because I read it all in one sitting, it didn’t feel like it took as long. But after the ending of it, I was left…wanting. But even with the disappointment I did feel, I still think I thought it was better than it was because I read it all at one time.

That being said…Beautiful Darkness, I didn’t read in one sitting. As a matter of fact, I have several opportunities to put it down. And put it down I did. It wasn’t that I disliked the book. That wasn’t it at all. Honestly, I just didn’t feel much of anything one way or the other. It wasn’t that the whole time I was reading it I was thinking “this is such a crappy book, I hope it gets better.” But I also wasn’t thinking, “Oh my goodness, what happens next?” either. I have to think that not feeling anything is not quite as bad as hating a book, but it does say something about it when you don’t feel anything after (or during) reading it.

This book was different than book one. Book one followed Lena and Ethan’s journey up to her “Sixteenth Moon” where she’s supposed to be Claimed for Light or Dark. She supposedly doesn’t have a choice, yet at the end we find that she can choose. If she chooses Light all of the Dark Casters in her family will die, including her beloved Uncle Macon—who tries to fight the Darkness—and her misguided cousin, Ridley—who was like her sister before Ridley’s Claiming. In this book, book two, we follow Lena and mostly Ethan’s journey up to Lena’s “Seventeenth Moon” where she in essence finally does choose. I won’t ruin it one way or the other. But at the end of book 2, Beautiful Darkness, it say something about the fact that if Ethan was paying attention he would hear the new song playing “Eighteenth Moon.” And honestly, that just left me feeling depressed. I guess the numbered moons are supposed to be the theme between the books in the series, but I just feel like Eigteenth Moon, or Beautiful Chaos (book three that is already out), is going to follow the pattern of the last two books. And more than anything, I just want to be done with the numbered moons, and this series.  I know, sounds harsh. Just telling you how I feel.

But, I never feel like I can abandon a series without seeing it through to the end, so I will read Beautiful Chaos at some point. I just really have no idea when, and I can’t say I’m looking forward to it.

P.S. I also just finished reading Lament by Maggie Stiefvater. Beautiful Darkness had 503 pages and Lament had 325. SO much more happened (or at least it seemed that way) in Lament than in Beautiful Darkness. Just saying…

Posted by Somewhere Only We Know at 9:34 AM No comments: