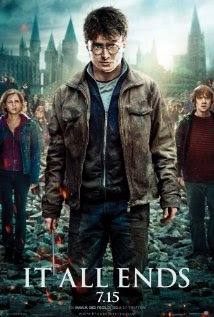 Midnight showing was great...and crazy. Our movie theater here didn't have the organization down for this midnight showing. I've been to see 4 midnight showings now (Twilight, New Moon, Eclipse, & now HP7-2) and this was the craziest yet. Plus we got stuck on the second row which was the pits. I was getting sick during the previews due to the rapid movement from one shot to the next, plus I'm extremely far-sided in one eye--which means I see better far away--but once the movie started up it was better. Still not as good as sitting at the top, but acceptable.

The movie was really, really good. I was genuinely impressed overall. They really stuck to the book with the beginning of the movie. Of course when it comes to a book making it to the big screen, changes are made for the sake of time and visual appeal and sometimes just because. This movie was no different. There were some things I really wish they had not changed and others that I suppose I can understand. But that's the way it always is. If the movie was exactly the same as the book, there would be a lot less to talk about.

My biggest complaint of the changes they made in the movie (SPOILER ALERT) is that Harry tells Hermione and Ron before he goes to the forest to meet LV in the movie, which he does not do in the book. It only bothered me so much because while going through the book that was the most emotional scene for me. Harry's just witnessed Snape's memories in the pensive and he realizes that he has to die. So he goes to face his death alone...very alone. He has the resurrection stone and he sees his parents, etc, but even they vanish before he actually faces LV. And my impression while reading the book was that of him being utterly alone. I didn't QUITE get that from the movie. Sometimes I think movies and tv shows accidentally protray the main character as being a superhero and above what they are, when in truth Harry was really scared (not to the point of refusing to do what he had to) and truthfully he winged it A LOT, but that's what we love about him. He's real, and he's human--or well, wizard, but you get the point. I don't know, I didn't get the same feeling from the movie in that scene that I did in the book.

Oh and I wish Harry had been able to tell LV off in front of everyone, but they changed that up a bit too. Not too devastating though. And loved the scene with Mrs. Weasley and Bellatrix. Last thing (I think), Harry and Jenny's kiss...awkward. They totally could have done another take for that one. Not nearly as good as Ron and Hermione's.

Well pleased. Sad that it's over. Want to see it again.