A Clash of Kings - Review 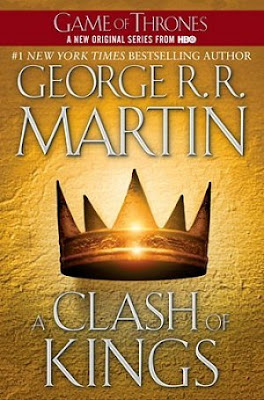 Goodreads description--Time is out of joint. The summer of peace and plenty, ten years long, is drawing to a close, and the harsh, chill winter approaches like an angry beast. Two great leaders—Lord Eddard Stark and Robert Baratheon—who held sway over an age of enforced peace are dead...victims of royal treachery. Now, from the ancient citadel of Dragonstone to the forbidding shores of Winterfell, chaos reigns, as pretenders to the Iron Throne of the Seven Kingdoms prepare to stake their claims through tempest, turmoil, and war.

As a prophecy of doom cuts across the sky—a comet the color of blood and flame—six factions struggle for control of a divided land. Eddard’s son Robb has declared himself King in the North. In the south, Joffrey, the heir apparent, rules in name only, victim of the scheming courtiers who teem over King’s Landing. Robert’s two brothers each seek their own dominion, while a disfavored house turns once more to conquest. And a continent away, an exiled queen, the Mother of Dragons, risks everything to lead her precious brood across a hard hot desert to win back the crown that is rightfully hers.

A Clash of Kings transports us into a magnificent, forgotten land of revelry and revenge, wizardry and wartime. It is a tale in which maidens cavort with madmen, brother plots against brother, and the dead rise to walk in the night. Here a princess masquerades as an orphan boy; a knight of the mind prepares a poison for a treacherous sorceress; and wild men descend from the Mountains of the Moon to ravage the countryside.

Against a backdrop of incest and fratricide, alchemy and murder, the price of glory may be measured in blood. And the spoils of victory may just go to the men and women possessed of the coldest steel...and the coldest hearts. For when rulers clash, all of the land feels the tremors.

Audacious, inventive, brilliantly imagined, A Clash of Kings is a novel of dazzling beauty and boundless enchantment—a tale of pure excitement you will never forget.

Wow...first post I've had in over a month. This book was a big undertaking. (4 Stars by the way.) It wasn't so much that the book was long--although it was--but it was just easy to take breaks. Don't get me wrong, it was good, and it held my interest, and just like A Game of Thrones there were plenty of twists throughout the book, but periodically you'd come to a narrator that was just easy to put down.

The addition of Theon made sense, and you understand his character...and possibly even feel sorry for him. But by the end of the book, he's easy to hate. Bran...I struggled through his storyline some, but the further you get into the story the more it fits in with everything else that's going on and the more intriguing it becomes. We really get to see how brilliant Tyrion is throughout this book. He's playing this game with his sister, the realm, and the other self-proclaimed kings like nobody's business. Possibly one of the smartest characters of all, and definitely the wittiest. Jon's storyline was actually a struggle for me in the beginning as well. Even though he's one of my favorite characters, but my how the tables turn at the very end for him. Good stuff. Catelyn...I'm not sure what can be said about her. She's got so much on her shoulders and has been through so much. She's one of my favorite characters as well. The addition of Davos, though he doesn't have many chapters, is brilliant to me instead of George RR Martin writing through Stannis's perspective, yet we still get an inside story on what's going on with that camp. Dany doesn't have many chapters in this book, but I'm excited about where she seems to be heading. And finally (I think), Arya. Possibly my favorite storyline of this book. Arya's got all kinds of adventures presented to her in this book. I can't wait to see what happens next.

The supernatural aspects of this story shine through in this book more than the previous book in this series. This is another facet that I'm waiting to see how it all plays out through the entire series. Dany of course seems surrounded by the supernatural. But Davos/Stannis and the addition of the Red Lady, Bran and Summer, Jon and the wildlings/eagle, Arya and Jaqen H'ghar. I'm sure there's more.

Exciting things. Looking forward to the twists and turns to come in book 3, but I have to take a break from the series. I need to read something that I can blow through really fast and knock out some books quickly.

Posted by Somewhere Only We Know at 10:07 PM