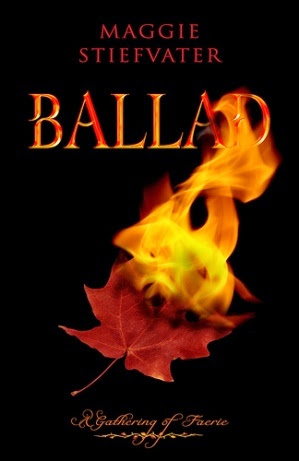 Ballad: A Gathering of Faerie (Books of Faerie, # 2)

Goodreads description--In this mesmerizing sequel to Lament: The Faerie Queen's Deception, music prodigy James Morgan and his best friend, Deirdre, join a private conservatory for musicians. James' musical talent attracts Nuala, a soul-snatching faerie muse who fosters and feeds on the creative energies of exceptional humans until they die. Composing beautiful music together unexpectedly leads to mutual admiration and love. Haunted by fiery visions of death, James realizes that Deirdre and Nuala are being hunted by the Fey and plunges into a soul-scorching battle with the Queen of the Fey to save their lives.

First book completed in 2012: Maggie Stiefvater's Ballad: A Gathering of Faerie. Only 3 days into the year and I'm knocking my books out already. By the way, giving Ballad 4 Stars.

I didn't really read the summary of Ballad before I started it. I only knew that it was the sequel to Lament. That being said, I assumed Ballad would be a continuation of Dee and Luke's story. So when I quickly found out that the majority of the narration was in James' voice, I was a bit disappointed. And it actually took me a bit to get into the story because of that--that and the fact that I seem to be in a non-fiction mood right now. However, I decided quickly that I liked the idea of James having an end to his story. And hopefully a happy ending.

So while I was initially disappointed that Ballad didn't follow Dee and Luke into more detail, I was overcome with excitement about James and the possibility of him having a relationship with Nuala. Maybe I feel this way because Ballad is fresher in my mind having just finished it than Lament is, but I think I really enjoyed James' story better than Dee and Luke's.

Dee still has a major role in Ballad. I found that the essence of who James really was as a character in Ballad is so much different than the picture of him that we get in Lament. And the same is true of Dee. The Dee that we come to love in Lament is quite different and annoying through the eyes of James and Nuala in Ballad. While this type of thing annoyed me in books past--namely The Dark and Hollow Places by Carrie Ryan--because the characters didn't maintain who I believed them to be from one story to the next, I think that was due to how attached I was to Gabry in The Dead-Tossed Waves and that wasn't really the case in Lament/Ballad and Dee. Don't get me wrong, I liked Dee in Lament, but I really can see the way that James sees Dee, the way that Nuala sees Dee, and what's happened to Dee that might cause some changes in her behavior from one book to the other that honestly makes sense.

Again, I probably enjoyed Ballad better than Lament. Good books. Another win for Maggie Stiefvater. 4 Stars. Check it out.

Posted by Somewhere Only We Know at 10:45 PM