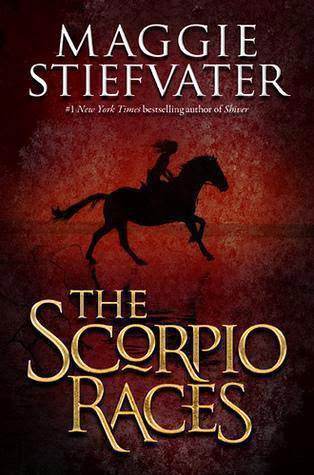 Goodreads description--It happens at the start of every November: the Scorpio Races. Riders attempt to keep hold of their water horses long enough to make it to the finish line. Some riders live. Others die.

At age nineteen, Sean Kendrick is the returning champion. He is a young man of few words, and if he has any fears, he keeps them buried deep, where no one else can see them.

Puck Connolly is different. She never meant to ride in the Scorpio Races. But fate hasn’t given her much of a chance. So she enters the competition — the first girl ever to do so. She is in no way prepared for what is going to happen.

4 Stars for The Scorpio Races.

I think I initially assumed that The Scorpio Races would be part of a series because series just seem to be the way of the writing world these days--or at least the majority of the books I read. It’s rare that I seek out a stand-alone book, though there’s absolutely no reason not to. And it’s even more rare for the authors I’m familiar with to produce stand-alone books. And I guess I’m still not 100% sure that The Scorpio Races is a stand-alone book. But I haven’t seen anything to suggest it is a series and it ends in such a way that making it into a series feels like trying too hard.

It needs to be said that I’m about half way through this book called The Shack by WM Paul Young, and that has been slow going for sure. When I feel like it’s taking too long for me to get through a book, I tend to stress out just a little. I feel the need to be productive and to have something to show for it. So every now and then I find myself having to take a break from a book that’s not a fast read for me in order to blow through something else quickly. Having said that, I started The Scorpio Races on Saturday and finished it today (Monday) on my lunch break.

Even though I read this book quickly, I can see where some might find it slowly paced and not a fast read at all. I was completely intrigued by the idea of water horses and the idea propelled me forward even when the love story was barely even a thought. (Usually, it’s the love story that propels me through a fiction book, because that’s my favorite part.) I think Maggie Stiefvater struck to the heart of my own childhood fantasies—and possibly every other little girls’—of owning my own horse one day. The passion and knowledge with which she writes about these beautiful and magnificent creatures is that of someone who grew up around them and carries a tremendous love and passion for them as well. Well written indeed if she did not actually grow up around horses. I thought the story was well thought out, multi-layered, and enthralling. As I said above, some might think the story is slow to get started, but personally, I think it was perfectly timed. Everything happened exactly when it needed to. And something that I've come to associate with Maggie Stiefvater's writing that I really enjoy is the way the story is told through multiple narrators, but always the one who has the most interesting story or perspective to tell--not just swapping narrators just to swap or just to keep the story moving and the reader frustrated.

I like when the location of a tale has its own traditions and festivals and celebrations. And Thisby definitely offered that. And even more than that, I like when a story is new and this idea of water horses is something that I’ve never heard of before. Granted, I haven’t spent much time researching ancient folklore, myths, etc. But I have read many books with a supernatural aspect and have yet to run across anything remotely similar to this idea of water horses. Kudos for originality.

The character of Puck reminds me somewhat of Katniss from The Hunger Games in this desperate need that she has to hold her family together and to provide for them in any way possible, even if it means entering this dangerous and potentially life threatening situation. Puck isn’t necessarily as survival savvy as Katniss, but she’s not quite having to hunt for food for her family either—though I suppose if she doesn’t win the Scorpio Race this year she’ll have to resort to that (not saying whether she does or doesn’t win—keeping it spoiler free). But both characters (Puck and Sean) have their talents and are well-versed in anything related to their talents. Sean Kendrick is perhaps one my favorite heroes in a book that I’ve read recently. He’s silent and brooding--which I love in a fictional hero--but extremely open at the same time. He’s not afraid of being vulnerable when it comes to his love for Corr, as well as the other horses, and is fairly open with Puck the entire time. Even Corr and Dove--the two main horses--have great personalities and are characters that you come to love. They are strong characters in a strong book.

*Side note: I like how their full names are used. I think it’s a unique little tid-bit that makes the characters more real and alive. How Puck uses "Sean Kendrick" the majority of the time. And how Sean says "Kate Connolly" or "Puck Connolly" a large portion of the time too. Really stinking cute in my opinion—but not cheesy cute.

Both Puck and Sean have immensely noble reasons for trying to win the Scorpio Race, but there can only be one winner. Who will it be? You’ll have to check it out to see for yourself.

Have you read The Scoprio Races? What did you think? Let me know!