All Things Halloween Review - The Bird and the Sword 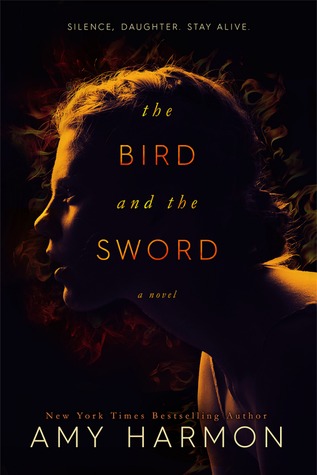 The Bird and the Sword

Goodreads description--Swallow, Daughter, pull them in, those words that sit upon your lips. Lock them deep inside your soul, hide them ‘til they’ve time to grow. Close your mouth upon the power, curse not, cure not, ‘til the hour. You won’t speak and you won’t tell, you won’t call on heav’n or hell. You will learn and you will thrive. Silence, Daughter. Stay alive.

The day my mother was killed, she told my father I wouldn’t speak again, and she told him if I died, he would die too. Then she predicted the king would trade his soul and lose his son to the sky.

My father has a claim to the throne, and he is waiting in the shadows for all of my mother’s words to come to pass. He wants desperately to be king, and I just want to be free.

But freedom will require escape, and I’m a prisoner of my mother’s curse and my father’s greed. I can’t speak or make a sound, and I can’t wield a sword or beguile a king. In a land purged of enchantment, love might be the only magic left, and who could ever love . . . a bird?

The Bird and the Sword reminded me a lot of The Key by Jennifer Anne Davis. A castle, being held hostage as a political pawn, a potential uprising, an evil father/king, and plot "twists" that were foreseeable from early on. The biggest difference between the two was the supernatural aspects of The Bird and the Sword and then lack of a brother from The Key. Because the stories were similar to me (though still pretty different), I don't think I enjoyed The Bird and the Sword as much as I could have. It was still good, but not great for me.

The backstory is that there are 4 gifts (Teller, Changer, Spinner, and Healer) in this world. But the people who have these gifts have been vilified by a history of scared kings. Kings who are scared that the gifted could easily out power them one day. And so the gifted are hunted and executed. Lark's mother was executed right in front of her when she was a child, but before dying her mother (a Teller) pronounced a curse. There was a curse on the current king, on his son, on Lark's father, and in some ways, a curse upon Lark herself. The current king would lose his soul and lose his son to the sky. Lark's father's well-being would be tied to Lark herself. And Lark wouldn't be able to speak.

As the king who executed Lark's mother is now gone and his son is king, Lark's father is only one step away from the crown in the line of succession. As such he's rallying forces who are trying to oust the current king (Tiras). Tiras sees an opportunity to capture Lark as a political pawn to get her father to fall in line. Only he really has no idea how great of a move taking Lark captive would be considering for Lark to die would be for her father to die as well. So her father is going to do everything he can to ensure they both live.

Even though Lark can't physically speak, she has one of the gifts. She's a Teller. Her gift is words. She hears words from people and animals. It is usually only one word...whatever word the person or animal feels the most at any given moment. Like "fear" or "home" or "safe." Lark's gift begins to alter a bit the longer she's a hostage because Tiras begins to teach her how to read and write--opening up a whole new world of words for her. Of course the two develop a connection, especially as they begin to share secrets with each other.

I appreciated Amy Harmon drawing things out the way that she did. Lark and Tiras had a journey for sure. They started with dislike and distrust, but that changed and grew over time. And while there was a romantic relationship, it didn't develop in any kind of way that was expected or typical. And (highlight for spoiler) I loved how one of my pet peeves of arranged marriages wasn't the case for Lark and Tiras.(end spoiler)

I will say that I didn't love the volgar, which was another supernatural aspect of the story. For some reason, these creatures were beyond my scope of imagination. I also found the parts of The Bird and the Sword that were supposed to be surprises or plot twists were pretty predictable. This wasn't a huge deal, but I did find it a little annoying to be able to guess these things so easily.