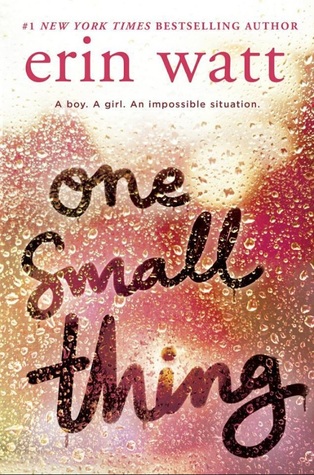 Goodreads description--Beth’s life hasn’t been the same since her sister died. Her parents try to lock her down, believing they can keep her safe by monitoring her every move. When Beth sneaks out to a party one night and meets the new guy in town, Chase, she’s thrilled to make a secret friend. It seems a small thing, just for her.

Only Beth doesn’t know how big her secret really is… <>Fresh out of juvie and determined to start his life over, Chase has demons to face and much to atone for, including his part in the night Beth’s sister died. Beth, who has more reason than anyone to despise him, is willing to give him a second chance. A forbidden romance is the last thing either of them planned for senior year, but the more time they spend together, the deeper their feelings get.

Now Beth has a choice to make—follow the rules, or risk tearing everything apart…again.

Perspective is a funny thing. While reading One Small Thing, I had to laugh a little because Beth's parents were very similar to mine. Where I hadn't lost a sibling, my parents just had strong rules about what was and was not acceptable behavior in their house. Sneaking out and going to parties would fall under the category of unacceptable. Where Beth acts like every teenager in the world has done this or should be given a pass for doing this, yeah my parents would have been on me just like hers were on her. My parents never took the door off my room, but it was certainly threatened at times. Yet I knew what behavior would prompt them to follow through and what wouldn't. One advantage that Beth's parents had over mine was technology. I didn't have a cell phone until my senior year of high school. It was pay-per-minute. And each text message would cost me a minute whether incoming or outgoing. Yet because it was pay-per-minute my parents didn't have access to my call or text history. And I wasn't dumb enough to leave my phone lying around where they could just pick it up and go through it. Of course, they could have asked and I wouldn't have had a choice but to show it to them. But I didn't give them a reason to do so. There was also not a thing such as GPS locating in my day. That would have changed things up a bit for me. All of this to say that Beth's parents both did and didn't seem extreme to me. They jumped the gun a few times on things that I didn't think Beth did that were too bad, but their punishments weren't unfamiliar or unrealistic in my opinion.

Of course, all of what Beth was going through had to be so that she could relate in whatever small way to Chase. Rightly so, Chase puts her in her place about her attitude in dealing with her parents. I liked Chase a lot. He was both sorrowful and repentant over his past actions. He does every single thing in his power to be at peace with those around him. Which isn't easy to do when everyone seems to be against him. I do know that there can be quite the mob mentality when it comes to situations like his. People judge without facts. They can be cruel. But just read the comments on Facebook over any news article just about and you'll see that there are people always on both sides of the fence. No matter what topic it may be concerning.

One Small Thing did have some language that just seemed thrown in and unnecessary. For me this is always a pet peeve. Especially when the language seems forced.

I read this book really quickly--especially given my reading pace for the year overall. I enjoyed it. Beth's battle against her parents had me chuckling to remember my own youth. I rooted for the romance and for the characters themselves. I don't know that I would say Chase and Beth had an epic romance, but theirs has been a favorite of the books I've read this year. The ending wasn't a huge surprise to me, but I really disliked Beth's best friend (I can't remember her name at the moment. I'd blame that on mommy brain, but the truth is I rarely remember main character names either. Thankfully those are usually listed in the description so I don't have to look them up.). Overall, I really enjoyed One Small Thing and it gets 4 Stars. Have you read One Small Thing? What did you think? Let me know!