All Things Halloween Review - Hero at the Fall 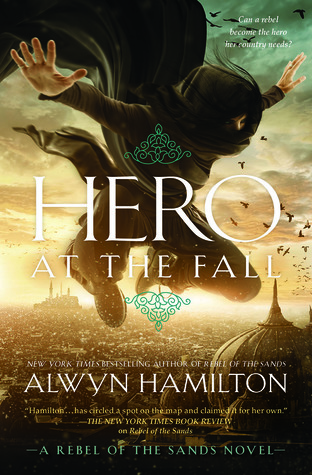 Goodreads description--When gunslinging Amani Al'Hiza escaped her dead-end town, she never imagined she'd join a revolution, let alone lead one. But after the bloodthirsty Sultan of Miraji imprisoned the Rebel Prince Ahmed in the mythical city of Eremot, she doesn't have a choice. Armed with only her revolver, her wits, and her untameable Demdji powers, Amani must rally her skeleton crew of rebels for a rescue mission through the unforgiving desert to a place that, according to maps, doesn't exist. As she watches those she loves most lay their lives on the line against ghouls and enemy soldiers, Amani questions whether she can be the leader they need or if she is leading them all to their deaths.

Ugh you guys, I got Hero at the Fall from the elibrary. Well my loan expired when I was 40% finished with reading it, and when I went to go check it out again, I was 7th!!!! in line. So I had to put it down for quite a while before getting to finish it. I will say that the first 40% was really slow for me which is why it took me 14 days to read just that much of it. Yet the last 60% went by fairly quickly.

One of my frustrations with this book and even this series is that I felt like things heated up quickly between Jin and Amani, and then they just kind of stalled if not even went a little cold. The two were very slow about moving forward and through the series they were apart for large portions. Thankfully they weren't apart for too long during Hero at the Fall, but even when they were together the romance didn't exactly drive the story forward...at least until the very end.

Where Amani and Jin might have been together for the majority of the book, we were missing some very major characters instead--Ahmed & Shazad namely. I was actually okay with this because at times Ahmed could slightly annoy me, and Shazad's absence forced Amani to step up into a leadership position she never would have done otherwise. I really appreciated at the end seeing the difficulties Ahmed faces as a leader. There are always hard questions leaders face and they will never make everyone happy. We would do well to remember that in our culture today.

At first I thought Hero at the Fall was going to end up disappointing me. I worried everything was going to be predictable. And even though I won't say there were any twists I didn't see coming, I can say that I was ultimately satisfied with the ending.

Hero at the Fall was a slow start for me. It didn't help that my library copy ran out of time and there were 7 people ahead of me before I could finish it. I worried that I would be disappointed with this series ender given the beginning, but I ended up being satisfied with the ending even if not blown away. Hero at the Fall gets 4 Stars. Have you read Hero at the Fall ? What did you think? Let me know!

Email ThisBlogThis!Share to TwitterShare to FacebookShare to Pinterest
Labels: "All Things Halloween", 4 Stars, Alwyn Hamilton, Fantasy, Hero at the Fall, Rebel of the Sands, Young Adult