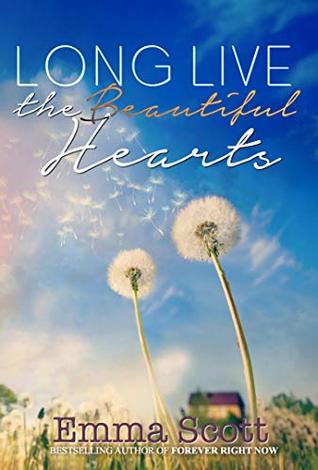 Those were my vows, and after all that had happened with Connor and Weston, I was determined to keep them. To protect my heart.
And then he came home, and my vows became his promises.

He held my heart in his hands with reverence and care.
He helped me find my soul’s greatest purpose in life.
He loved me with a love so pure and vibrant, I knew I’d never feel anything like it in a hundred lifetimes.
It was real.

Until it wasn’t.
Until it all came crashing down when I discovered the deep love I thought I’d found was nestled in a web of lies—so soft and silken I hadn’t noticed it was there.
Until it was too late.

**********
Long Live the Beautiful Hearts is the emotional, heart-wrenching conclusion to the Beautiful Hearts Duet by bestselling author, Emma Scott, and is inspired by the classic tale, Cyrano de Bergerac. (Roxanne) THIS IS NOT YOUR TYPICAL LOVE TRIANGLE #confusedhearts #notamenage THIS BOOK IS NOT A STANDALONE. It should not be read without first reading Bring Down the Stars

Man you guys, I BLEW through this book and the previous one (Bring Down the Stars) in two days. This is unheard of for me at this point in my life. I just don't usually have the time available to dedicate to reading so much in a row. But I read about 6 hours in one day as we took a day trip to a wedding three hours away. But I couldn't stop reading this book. From the cliffhanger from book 1 to the beginning of this one.

It's almost impossible to discuss this book without getting into the land of spoilers. I'll do my best. I mean the description is so vague that you don't know who even came back from war. So...how do I even discuss this book?

Where I struggled with knowing inevitable conflict was coming in Bring Down the Stars, I felt like I was passed the hardest part because the damage had already been done. Now it was just about unraveling the lies in time and seeing how Autumn would handle them. Yet in so many ways, the struggles were only just beginning by the time we start Long Live the Beautiful Hearts. If there's one thing I wish I could change about this book it would be that Autumn had discovered (or been told) the truth sooner and that she would have had time throughout the book to recover from the lies in a slower manner. While I wasn't entirely unsatisfied with how everything was handled, the resolution and forgiveness did feel a bit like a switch was flipped and she changed from sad and hurt to happy and forgiving a bit too jarringly to feel realistic.

I was so impressed with the poetry actually featured in Bring Down the Stars. Specifically, the last/main poem of the book. And so for that to be the case, I found myself a little disappointed with the poems included in Long Live the Beautiful Hearts. They weren't bad, but I just didn't find them as striking.

What was striking though was the difference in the Before versus the After--especially when considering the real-life events that Emma Scott was dealing with. She lost her daughter, Isabel, in between books to a massive heart attack due to a rare complication she'd had since birth. These two books being one complete, thought-out story with every piece being perfectly executed and planned from the beginning makes the Before and After of the books mirroring Emma Scott's own Before and After poetic and heartbreaking. Real life imitates art imitating real life. As a mother, my heart breaks for Emma Scott and what she's gone through even more than these beautiful characters that she's written about in this story.

I honestly had mixed thoughts about the disability pieces of the story-line. On the one hand, it was so refreshing. I can say I've probably read only other book with a main character that had a similar disability. I imagine Emma Scott researched tons about these types of disabilities before making any decisions for her character, but I don't have that luxury or knowledge base. So there were some things that I just have no knowledge base for. Other aspects were so heartbreaking to think that I've never thought about these things before. And it opened my eyes to the need for more compassion and consideration from me.

Favorite quotes (that aren't too long or spoilers):

-Was there any greater gift from one human being to another than understanding?

-"In my mind, [...], that has always been the fault of your armor; you have built it so strong that it doesn't protect you so much as it hurts you to carry its impossible weight."

Long Live the Beautiful Hearts was a beautiful end to a wonderful story. I started this series fearing how the retelling would be handled, but Emma Scott worked it so well. And the reasons that our characters felt unworthy of love are so much better and deeper than some big old ugly nose. I want to say so much more about this book and this series, but I just can't spoil it for any potential readers. This book and the series weren't completely perfect so I'm not giving this book 5 Stars, but it heartily deserves 4.5 Stars. Have you read Long Live the Beautiful Hearts? What did you think? Let me know!