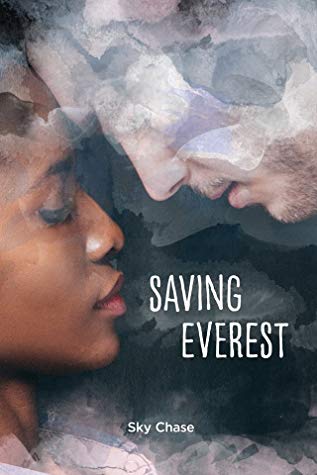 Goodreads description--From the outside, Everest has it all, but there’s only one girl who can see him for who he truly is...and it changes his life forever.

Everest is the most popular guy in school. As the handsome and wealthy captain of the football team, he has the world at his fingertips, but he’s desperately unhappy. Unconvinced that he should live, he tries to take his life. On the surface, Beverly’s different from Everest in every way. Quiet, shy, and hard working, she keeps to herself, focusing on her schoolwork and part-time job to distract herself from her less-than-perfect home life.

When Everest returns to school, in more pain than ever, he’s discarded by his friends and girlfriend, and draws little empathy and too much attention from those who surround him. But when Beverly and Everest meet unexpectedly in a dusty corner of the library, together they discover how just how rich life can be.

I was hesitant about requesting Saving Everest. Sometimes I look forward to dark stories that can move me emotionally, and sometimes they just end up draining me. In the case of Saving Everest, I did begin to wonder if the depression that Everest was suffering from was too much for my personal "read for fun" time. I mean his depression was bad enough to cause him to attempt suicide. But thankfully the story didn't stay here too long.

I will say before moving on from that too much that we do see some of the things Everest was struggling with. His father is domineering, unsupportive, and harsh. His mother seems uninvolved or uninterested. He has friends and a girlfriend but I suppose we learn that they're not true friends. And he plays football, but I never really figured out if he hated football, the attention it brought him, or the pressure he felt to perform. So I found myself questioning how things got so bad for him to consider ending his own life. But maybe that was the point of it all? You're not really supposed to understand depression because it isn't always logical.

It was a little hard for me to believe that Everest is completely surrounded by people who are so cold and callous. That ranging from close family to supposed friends to random strangers to teachers could all be very cold toward him and the things that he was struggling with. Again, thankfully the book didn't stay stuck in this place for too terribly long. But I did have to question that there weren't more people with softer hearts.

Beverly was a breath of fresh air. She breathed life into the book just as much as she breathed life into Everest. I worried that things would be too literal with the title and Beverly single-handedly saving Everest from his depression. It's never a great idea to bank your entire happiness upon another person as that person could be taken from you at any time. And while Beverly does change things for Everest, I don't think the credit is only hers.

I was a little confused as to how Nami could be popular enough socially to be student body president when she seemed to be so abrasive to so many people. Of course, I came to really enjoy her character.

Saving Everest had moments that felt like continuity errors to me. Some I've already mentioned. Also, Everest complained at one point about the pressure to perform with football and how he'd come to hate people approaching him and praising him based off the game, yet when he turned to singing the same thing happened. He put pressure on himself to be perfect, to perform. And he constantly had more and more people approaching him in response to his music. At the same time, especially toward the end of the book, I felt like there were entire missing pieces of the story. A little more polish would have helped.

All of that being said, I read Saving Everest pretty fast. I didn't want to stop. As a matter of fact, I stayed up a little late two nights just to keep reading. It wasn't a perfect read for me. I felt some pieces were missing and others were contradictory. But overall, I loved Everest and Beverly. Saving Everest gets 3.5 Stars. Have you read Saving Everest? What did you think? Let me know!