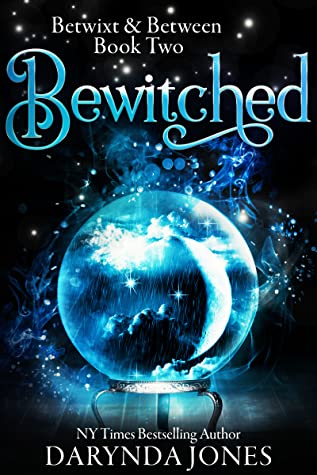 Goodreads description--Forty-something Defiance Dayne only recently discovered she comes from a long line of powerful witches. Added to that was the teensy, infinitesimal fact that she is what’s called a charmling. One of three on the entire planet. And there are other witches who will stop at nothing to steal her immense power, which would basically involve her unfortunate and untimely death.

No one told her life after forty would mean having to learn new lifeskills—such as how to dodge supernatural assassins while casting from a moving vehicle—or that the sexiest man alive would be living in her basement.

Whoever said life begins at forty was clearly a master of the underappreciated and oft maligned understatement.

This is another book when I let too much time go by between finishing the book and writing my review. Sigh. And I truly can't remember much that I wanted to say about Bewitched.

I really couldn't remember Defiance bringing Ruthie back from the veil at the end of Betwixt. So it took me a little while to settle in to the start of Bewitched. I also felt like overall Defiance was facing a lot of the same challenges in Bewitched that she already faced in Betwixt. She doubts her abilities in Betwixt, but now she's trying to deny they exist. She doesn't expect to be able to stay in the house and in Salem in the first book and now she's looking for a way to escape. I just don't want the stories to repeat themselves too much.

I also found it slightly discouraging how much doubt Defiance has in Roane or at least in the possibility of him being interested in her. To me it seemed quite obvious that he feels connected and even desires her. And well by the end of the book it should definitely be obvious to her.

Defiance does hint about some big evil that should be coming based upon what she witnessed in her coma at the beginning of the book. I'm curious as to how many books Darynda Jones intends for this series. It seems similar to the Charley Davidson series in that not much happens in the overall plot per book. Enough to keep you interested and wanting to know more, but a slow trickle of information for the overall plot.

I'll be honest, this review sucks. *I'm pregnant and dealing with a sinus infection and so my brain is just not working like I'd like. I finished Bewitched 14 days before writing this review which I'm beating myself up about not reviewing sooner. I enjoyed it. I really did. I'm happy to give Bewitched 4 Stars. Have you read Bewitched? What did you think? Let me know!

*Original review written in October 2020 but saved for "All Things Halloween" 2021.