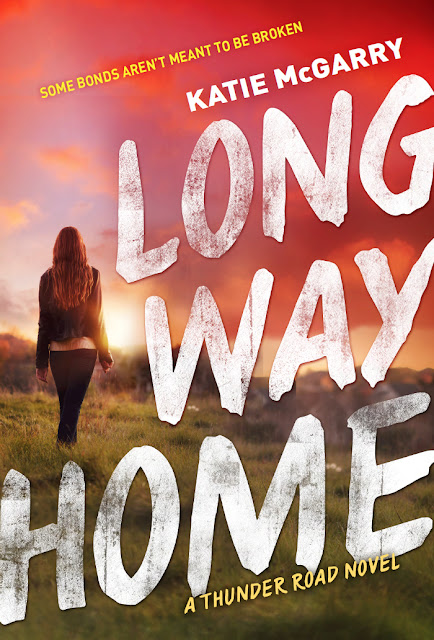 I read the first chapter of Long Way Home at the end of my copy of Walk the Edge. Obviously, Chevy and Violet have been secondary characters in the prior two books in this series, and their backstory has been set up all throughout the series. And then the publisher released a sampler (the first 60ish pages) on NetGalley. I didn't realize that it was a sampler until I downloaded it to my kindle. It was such a disappointment that it wasn't the full book, but since that 60ish pages ended at such a crucial part I decided to go ahead and preorder my copy. And I'm glad that I did. Katie McGarry is one of those authors that I can count on to be really consistent with her writing and characters.

I wasn't sure I was going to love Chevy and Violet. More Violet really. She was really angry with the club, with Chevy, in general after her father died. And she was kind of mean to Chevy when it was obvious that he only cared about her. Plus Violet's angry with the club for not treating her like one of the guys at times. I mean it's not like she wants to join the club, but she does want to be clued in to whatever information may pertain to her. And while I can respect that, I just got sick of her whining about not being treated how she wanted to be treated because she was a girl. If you've read the prior two books, you know that even Oz and Razor weren't getting all the answers they wanted and they were both guys. So I could understand Violet's point of view while also being a little annoyed with her issues at the same time.

Chevy was easy to like. He wants nothing more than to love Violet, but he knows how she feels about the club. Yet they are his family. I mean beyond friends that feel like family. They actually are his blood family. Yet even his mom isn't excited about him joining the MC. Chevy is being pulled in all different directions in this book, and I appreciated all that he was up against. I especially love the tie in with Isaiah from Katie's Pushing the Limits series. I want more more more information about this.

Katie McGarry does a good job or making the reader question the motives and intentions of the club with each book. You'd think that having been through two prior books where we find out that the Terror has nothing but good intentions for the characters they consider family that the MC would be beyond questioning, but with each book there's plenty to create doubt.

I also get so attached to Katie's side characters. Pigpen and Addison are both ones that I want more from. I hope she explores both of their stories in the future.

-"The words out of your mouth aren't the only things she hears."

-"I'm secure in who I am and other people's definitions don't define me."