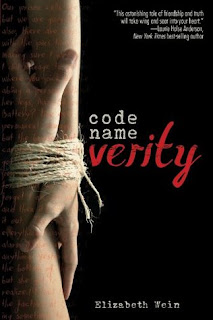 Goodreads description--Oct. 11th, 1943--A British spy plane crashes in Nazi-occupied France. Its pilot and passenger are best friends. One of the girls has a chance at survival. The other has lost the game before it's barely begun. When "Verity" is arrested by the Gestapo, she's sure she doesn't stand a chance. As a secret agent captured in enemy territory, she's living a spy's worst nightmare. Her Nazi interrogators give her a simple choice: reveal her mission or face a grisly execution.

I got Code Name Verity from NetGalley back in May or June of 2012. I’d seen many people comment on how much they loved this book, and I’d even seen people say based off the description they didn’t think they’d enjoy it, but after reading it, they loved it. And that’s exactly where I was. I put off reading it because well the description just didn’t pull me in. I love love stories. Romance. Falling in love for the first time. But that’s not all I’m capable of reading and enjoying.

Elizabeth Wein, I owe you an apology for putting off reading Code Name Verity for so long. This book is “bloody brilliant.” That’s the phrase that keeps getting stuck in my head when I think about it.

Reviewing Code Name Verity is going to be somewhat difficult because there’s so much that doesn’t need to be shared with the reader until he/she gets to it in the book. And Code Name Verity is one of those books where EVERY detail is tied into everything else—the bigger picture. Yet you don’t realize that until the book is 85% complete. But this is one of those books that I need to go back and re-read because I know I missed so much in the first half of the book now that I know how it ends.

Elizabeth Wein says in the author’s note that she would love to go through the entire book and document where she got the idea for each piece of the book, but that it would take a really long time to do so. However, I suggest to her that I’d love to read that. As I’m reading a book I always wonder such things and this is definitely one that I would go back and re-read along with the author’s notes. I can totally see that enriching the entire experience for me. (Like watching the Directors Cut of your favorite movie, which I may or may not do all that time.)

As the description above says, the main character is about a British spy (though she’s not English, please don’t be mistaken on that point) is captured by the Gestapo. The spy part is what I’m really trying to focus on right now. The first half of the book is from the spy’s point of view. We don’t learn her real name for quite a long time, and she has more than one code name, so it’s difficult to know which name to call her in my review. Just covering my bases as there might be readers of my blog unfamiliar with Code Name Verity, I’ll just stick with Verity.

As I was saying, the first half of the book is from Verity’s point of view. Her character is so well written that she literally jumped off the page within 5 sentences. Probably within the first two sentences I felt like Verity was a real person. I don’t know that I’ve ever had an experience with a character quite like Verity. Sure, I’ve loved characters, I’ve seen myself in characters, I’ve hate characters, etc. But I’ve never felt like a character was so real as Verity, and especially not so quickly. That being said, when narration swapped to Maddie to continue the 2nd half of the book, I was fearful that I wouldn’t be able to get Verity’s voice out of my head. However, that was not the case at all. Maddie was just as strong of a character and came to life with her own voice so clear and distinct from Verity’s. It’s truly amazing to me that Elizabeth Wein was able to create more than one character who came alive in this way because such a gift is truly, truly rare.

Along with such amazing characters and the tie in of every single detail, the way that Code Name Verity was written—as a spy writing out her confession and the journal of a pilot—was brilliant as well. The narration style fit the mood and events of the book perfectly. I don’t think Verity and Maddie’s story could have been told in any traditional narration style, and the journal/confessional style added to authentication. For example, I loved how both Verity and Maddie would be telling a story and interject their personal feelings or lamentations. It’s true stream of consciousness writing, which I happen to really enjoy.

As my fear for swapping narration from Verity to Maddie, I began another book almost immediately after finishing Code Name Verity, and not only could I not get Maddie’s voice out of my head (since she was the narrator of the 2nd half of the book), but the events and the end of Code Name Verity prevented me from being able to focus on the new story I had begun. Whoever authored the Goodreads description above hit the nail on the head when they said Code Name Verity would “stick with you long after the last page.” I have a feeling I’ll be thinking about this book quite frequently for quite some time.

Aside from “bloody brilliant,” if I had to describe Code Name Verity, I’d pick “harrowing” (also used in the Goodreads description). That pretty much sums it up. Code Name Verity gets 4.9 stars. Have you read Code Name Verity? What did you think? Let me know!

Posted by Somewhere Only We Know at 5:15 PM