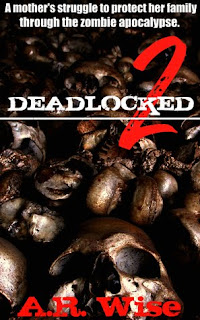 Goodreads--Part two of this series picks up immediately after the end of the first. David's wife, Laura, is forced to take over the protection of their family as the boat travels out into Hailey Bay, away from the zombies. However, the boat's pilot plans to dock back in the overrun city to rescue his own family, which will put Laura's in jeopardy.

Laura is forced to overcome unimaginable horrors as the zombie apocalypse explodes around her, but it is the evil intent of the humans around her that present her greatest challenge. The reader is taken far beyond the edge of their seat as Laura pushes forward to the inevitable end. No one is safe in a world where the dead hunt the living.

Guys…seriously…intense zombie-ness! Book 1 follows David as the main character in his attempt to find his wife and daughter in the beginning of a very new zombie outbreak. We meet up with Laura and the girls, Kim and Annie, at the end of book 1. That installment ends with David’s ultimate sacrifice for his family. Picking up with book 2, we switch to Laura’s point of view as she watches her husband's sacrifice and realizes that she too is willing to do anything for her girls.

Laura’s story is extremely intense and emotional even more so than David’s was. Laura does things in this book that blew me away. Whatever it takes. Not only does she have to protect her daughters from zombies, but also, even more so in this book, from the remaining human populace that’s seemingly lost all of their morals. Survival of the fittest abounds—kill or be killed. And despite rooting for the main characters, I saw the logic in a lot of the arguments from the other humans they ran into. The couple they came across on the boat…while I agree that the husband was a bit of a DB, he had some good points. Same thing with the “cops” who need to feed the masses they’ve assembled. Normal rules of "what’s mine is mine and what’s your’s is your’s" just do not apply anymore. It’s more like "what’s your’s is mine as long as I can take it from you."

Despite being a short book, AR Wise packed Deadlocked 2 with more action and story than some books 5 times the size, and I’m excitedly looking forward to continuing the story with Billy’s point of view in book 3.

AR Wise yet again added an author’s note to the end of this book. And on the one hand, it could easily come off as boasting how he describes all of his writing “tricks”—I can’t think of a better word there—such as mirroring the scene where David jumps into the water and being pulled under by zombies from book 1 to Laura’s scene in the water being pulled under by a shark, and how everything ties in together. And maybe I’m just dense, but I didn’t pick up on everything he explained in the author’s note while reading the book, so it actually made the book that much better for me (I did get the similarities of the specific scene I mentioned with the water though—I’m not that dense). So I’m torn between thinking it would have been better for AR Wise to let the reader discover all of this themselves, and feeling like he’s just so excited about his story that he can’t help but share as much of the story and the process as he can. Plus as I said, I didn’t pick up on all of the things he discussed in the author’s note, so I’m happy to know them now. They enrich the story.

All in all, Deadlocked 2 gets 4 Stars from me. If you're looking for a quick, intense read involving zombies, it doesn't get much better than the Deadlocked series. Have you read Deadlocked 2? What did you think? Let me know!

Posted by Somewhere Only We Know at 6:04 PM