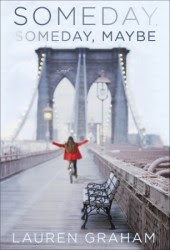 I requested Someday, Someday, Maybe because I really love Lauren Graham in Gilmore Girls and in Parenthood. And really I wanted to be a part of her new venture into writing. I think it's awesome that Lauren Graham's character on Parenthood just started tinkering with writing as well. I don't know if they went in that direction because of her real life or if that was planned out all along. Either way, really neat. I also wonder how much of Lauren Graham's life is molded into Franny and her life. "They" say it's easiest to write what you know, right? Anyway...just curious.

Speaking of Franny, she was an easily relate-able character. Franny begins the book with some super self-esteem issues. And she's super analytical, which I love because that's pretty much how I am. Franny's constantly questioning herself, her decisions, her talent, her appearance. Pretty much any aspect of herself that can be questioned is. More than anything Franny wants to be validated. She wants to know that she's not fooling herself into thinking that she can make a career out of acting. And I don't think anyone can blame Franny for having the thoughts that she has. She's quirky, sarcastic, and a bit clumsy. She reminds me of exactly the type of character that Lauren Graham portrays in her own acting roles.

I prefer female lead characters that I read about to be a bit stronger emotionally than Franny initially is. Yet the entire book is about the character growth that Franny experiences, so that makes all of the insecurities not only real but extremely worth it and valuable to read about. Franny doesn't stay in this place of low self-esteem and criticism. She learns to love herself for who she is...quirks and all.

Nothing in the story line was particularly surprising or unpredictable, but I enjoyed the story just the same. I don't read too many stories about aspiring actresses so it was just different enough to keep my interest. I definitely enjoyed this look into what a competitive world Franny desires to be in and how difficult just getting a start in it can be. Something I'd never thought about before was how frantic actors and actresses are to become established, yet taking just any and every job that comes their way could be the very thing that brings their careers to a screeching halt. You just never really know.