Waiting on When You Were Here 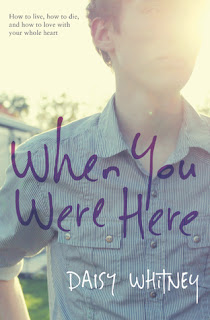 When You Were Here

Goodreads description--Filled with humor, raw emotion, a strong voice, and a brilliant dog named Sandy Koufax, When You Were Here explores the two most powerful forces known to man-death and love. Daisy Whitney brings her characters to life with a deft touch and resonating authenticity.

Danny's mother lost her five-year battle with cancer three weeks before his graduation-the one day that she was hanging on to see.

Now Danny is left alone, with only his memories, his dog, and his heart-breaking ex-girlfriend for company. He doesn't know how to figure out what to do with her estate, what to say for his Valedictorian speech, let alone how to live or be happy anymore.

When he gets a letter from his mom's property manager in Tokyo, where she had been going for treatment, it shows a side of his mother he never knew. So, with no other sense of direction, Danny travels to Tokyo to connect with his mother's memory and make sense of her final months, which seemed filled with more joy than Danny ever knew. There, among the cherry blossoms, temples, and crowds, and with the help of an almost-but-definitely-not Harajuku girl, he begins to see how it may not have been ancient magic or mystical treatment that kept his mother going. Perhaps, the secret of how to live lies in how she died.

Sounds emotional...I'm for it. What are you waiting on this week? Let me know!

Email ThisBlogThis!Share to TwitterShare to FacebookShare to Pinterest
Labels: Contemporary, WaitingonWednesday, YA