The Distance from A to Z - Review 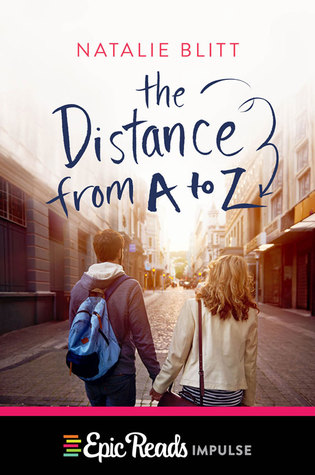 The Distance from A to Z

Seventeen-year old Abby has only one goal for her summer: to make sure she is fluent in French—well, that, and to get as far away from baseball and her Cubs-obsessed family as possible. A summer of culture and language, with no sports in sight.

That turns out to be impossible, though, because her French partner is the exact kind of boy she was hoping to avoid. Eight weeks. 120 hours of class. 80 hours of conversation practice with someone who seems to exclusively wear baseball caps and jerseys.

But Zeke in French is a different person than Zeke in English. And Abby can’t help but fall for him, hard. As Abby begins to suspect that Zeke is hiding something, she has to decide if bridging the gap between the distance between who she is and who he is, is worth the risk.

The Distance from A to Z sounded like a quick and fun read for me. I found it interesting that Abby felt so strongly against baseball and yet she would find that the guy who's constantly wearing all things baseball is one that she could really fall for. Sounds fun, right? It was. It was cute and fun just like I thought.

The reason why Abby's so against baseball is that her family and a few select boyfriends of the past have neglected Abby in favor of baseball. So it's easy to see how anyone would come to resent the sport were they in Abby's shoes. Yet there were times where I felt like she might be taking things a bit far.

Zeke was likeable. His big secret was pretty obvious, I thought. Because of that the times when Zeke would get mad at Abby when she would get close to his secret that was slightly annoying.

At times the amount of French in The Distance from A to Z was a little frustrating. It basically doubled the amount of words in the book because of how much needed to be translated. Obviously, I can't speak or read French so all of that was basically pointless for me as I was able to skim right over it looking for the translation instead. Periodically the translation wasn't spelled out. Instead you had to use the context of the conversation to determine it. But I did enjoy Abby's love for the language.

-"Here's my thing: I'm a nut about French," I confess. "I love the language, the sound of the letters, the way they feel in my head. The fact that in French you don't say I miss you. You said tu me manques: literally, you are missing from me. Because when you miss someone, it's more than just an active feeling of missing, it's like they have actually taken a piece of you with them when they left, the piece of you that was theirs."

-Like, please don't make out with my across-the-hall neighbor before class because I'm allergic to the smell of her on you.

Email ThisBlogThis!Share to TwitterShare to FacebookShare to Pinterest
Labels: 3 Stars, Contemporary, Natalie Blitt, The Distance from A to Z, Young Adult