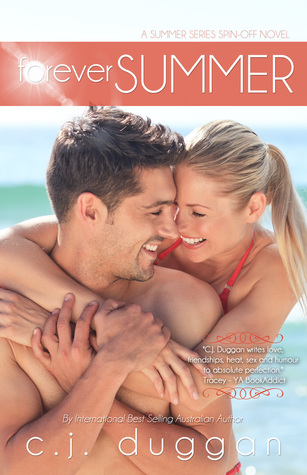 Goodreads description--You see there’s this boy.
He makes me smile, forces me to listen, serenades me out of tune and keeps me sane, all the while driving me insane. He's really talented like that. But for the first time in since, well, forever, things are about to change. The question is, how much am I willing to lose in order to potentially have it all?

I have been waiting on Forever Summer for quite some time. Obviously Ellie and Adam have both been pretty main characters since book 1, The Boys of Summer, as they are both best friends with Tess. In The Boys of Summer Ellie and Stan started dating. I was surprised to see them go their separate ways as the books progressed but was pleasantly surprised to see Ellie and Adam draw towards each other. I do so love a best friends-turned-more story.

Ellie is a party girl. She's been known to get trashed. And even though we found out in The Boys of Summer that they're mostly not true, Ellie's always had rumors going around about how easy she is. That being said, Ellie's probably the character I related to the least, but wanted her happy ending the most. Ellie definitely isn't a perfect character. She has a habit of being way too much in her own head and a bit self absorbed. But it's easy to not be concerned with the goings on of others when they're not open with you about what actually is going on with them.

Adam apparently has a lot on his plate. Yet this is one of those situations where everyone around him knows the deal but Ellie. He's hanging out with an ex-girlfriend a lot. And he's been kind of sketchy when it comes to being there for Ellie like he used to be. I wish there had been more discussion about Adam's military involvement, but I guess since Adam wasn't actually narrating and that would have been time spent away from Ellie it makes sense that it wasn't really a focus of this book.

I wasn't thrilled about the flashbacks and diary sections of Forever Summer, but I guess I can see why they were central to the story. Necessary to understand all of Adam and Ellie's history.

Forever Summer reminds me of the CJ Duggan writing that I prefer and enjoy. I didn't enjoy the Paradise series that she did near as much. The pacing was pretty quick and I found that I didn't want to put Forever Summer down even when I had to. I will say that considering Ellie's history, I was impressed with how non-graphic Forever Summer was. Yet the amount of f-bombs were above and beyond. I'm not sure if that's a cultural thing or what, but I've found this to be the case in most of her books.

When all is said and done, I've really enjoyed the Summer series. Forever Summer might be my least favorite in the series, but considering how highly I've rated the others that's not too much of a surprise. I still feel like Forever Summer deserves 4 Stars. Have you read Forever Summer? What did you think? Let me know!