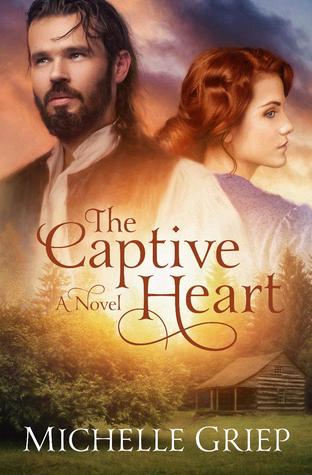 Goodreads description--Proper English governess Eleanor Morgan flees to the colonies to escape the wrath of a an angry duke. When the Charles Town family she’s to work for never arrives to collect her from the dock, she is forced to settle for the only reputable choice remaining to her—marriage to a man she’s never met. Trapper and tracker Samuel Heath is a hardened survivor used to getting his own way by brain or by brawn, and he’s determined to find a mother for his young daughter. But finding a wife proves to be impossible. No upstanding woman wants to marry a murderer.

I don't know what it is about stories where the characters end up in a marriage that they didn't start off wanting that I love so much. Do you guys have any idea? Arranged marriages, Vegas sporadic marriages, marriage as a means to an end, fake marriages turned real. These stories intrigue me and pull me in just about every time. Think My Lady Jane, The Kiss of Deception, A Thousand Nights, Lick, Waking Up Married, and Redeeming Love. And The Captive Heart was no different. As a matter of fact, I think The Captive Heart and Redeeming Love have a lot of parts in common.

Honestly guys, despite my penchant for forced marriages, this book was really outside of my norm. I'm not normally a big fan of historical fiction even though I read it occasionally. While I always want my books to have some sort of love story in it, I'm also not usually into "romance novels". Even the book cover design isn't what I normally go for. I usually avoid books where someone's head or body seems to be floating in the clouds above some landscape scene. And what I didn't even know until I started reading this one is that this a Christian book as well. I don't usually avoid Christian fiction, but I don't always seek it out either. Even though I'm a Christian myself, sometimes the genre can be overly cheesy. But each one of those things added into a book that I thoroughly enjoyed.

Everything about this book pulled me in. Eleanor's found herself in an impossible situation. She was a governess for a wealthy family, but she finds herself married to a man to keep from being basically sold into slavery or sent to jail. She's immediately thrown into the role of caregiver (or mother) and wife even though she didn't choose either role. But she's tries to make the most of the hand she's been dealt. Samuel is a hardened man. His first wife is dead, he has this man set on destroying his life, and most everyone in town is afraid of him. He's lived a rough life for sure. Both lean on God to direct their paths.

Personally, I enjoyed the Christian aspects of this book. It wasn't a book that hit you over the head with a message like the author was trying to teach the reader as sometimes happens in this genre. I would recommend The Captive Heart both because of and despite of the religious parts. If this concerns you because you don't normally enjoy this in your books, I would encourage you to read The Captive Heart anyway. There was this one scene in particular that I would wager was just as hot if not more so than many steamy scenes in other books yet it was completely clean in language and action.

I feel like I'm not doing this review justice. My thoughts are all over the place, and I just have so much to say. I'll just include my favorite quotes and then wrap this up.

-"Perhaps God is not calling you to live for peace, but rather to fight for it."

-He'd learned long ago that when a woman said nothing, she meant she'd die a bloody death before divulging what she thought he should already know.

-"Honor always comes at a price, else it would be worthless."

The Captive Heart is a book that is going to stick with me. I can see this being one that I'll want to re-read in the future. Fans of Redeeming Love by Francine Rivers will love this one. The Captive Heart proves that you don't need to dirty up a book with language or steamy bedroom scenes to make a book exciting or hot. The Captive Heart gets 4.5 Stars from me. Have you read The Captive Heart? What did you think? Let me know!