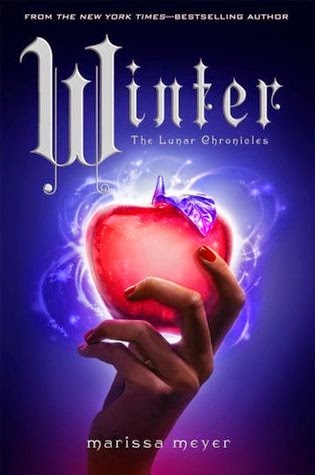 Goodreads description--Here is the stunning conclusion to the national bestselling Lunar Chronicles, inspired by Snow White.

When Princess Winter was thirteen, the rumor around the Lunar court was that her glamour would soon be even more breathtaking than that of her stepmother, Queen Levana. In a fit of jealousy, Levana disfigured Winter. Four years later, Winter has sworn off the use of her glamour altogether. Despite her scars, Winter’s natural beauty, her grace, and her gentleness are winning admiration from the Lunar people that no amount of mind-control could achieve.

Winter despises her stepmother, but has never dreamed of standing up to her. That is, until she realizes that she may be the only one with the power to confront the queen.

Can Cinder, Prince Kai, Scarlet, Wolf, Cress, Thorne, Princess Winter, and the palace guard Jacin find their happily ever afters? Fans will LOVE this amazing conclusion to the series.

The Lunar Chronicles has been one of my favorite series for a while. Starting with Cinder, I've actually felt like each new book in the series was better than the one before. And that set Winter up for some pretty high expectations. I received Winter for Christmas last year--which was shortly after it released. However, the 800 pages of this hefty book kept me from picking it up sooner. Well that and my life changes really. And honestly, I have to say that even though Winter didn't exactly feel slow to me, it did feel LONG. I understand why it was released as one book, but for length's sake, I really wished it had been more like two or even three separate books. I don't think the story told within would have made as much sense had it been broken out though.

Winter has so much to cover too. It's not just about Cinder and Kai, or Scarlet and Wolf, or Cress and Thorne, or Winter and Jacin. (Or Iko.) They're all in. They're all present. They're all narrated from at different points. Marissa Meyer does a great job being able to write from so many characters within one book. It feels cohesive while also distinct. I never once got confused with who was narrating and with so many characters that is really impressive. Of course because all of these characters have such distinct roles to play within the plot of the story, we didn't get to spend as much one on one time with Winter and Jacin as we have with the other couples in prior books. I still liked these characters a lot, but I wasn't as attached to them as I am to Scarlet and Wolf or Cress and Thorne.

As always, I absolutely loved the way that Marissa Meyer worked in the details of the fairytale that she's retelling. In the case of Winter, we're looking at Snow White. (Cinder = Cinderella; Scarlet = Little Red Riding Hood; Cress = Rapunzel) It is always obvious when she's mimicking the main storylines from the fairytales, but I never really know how she's going to work those details in. Of course, my favorite aspect of this retelling is probably her take on the dwarves.

Of course, it isn't just Snow White that we're dealing with here. Marissa Meyer has to wrap up the series arc as well. Will Levana finally get what's coming to her? Will Cinder, aka Princess Selene, finally get what's rightfully hers? Will everyone end up in a happily ever after--especially considering that each character finds themselves in mortal peril at some point or other? Will everyone survive? I do have to say that I was happy with all of the answers to these questions. There was one aspect at the very very end of the book that felt entirely hasty and really not my favorite decision for Marissa Meyer to have made. It very much reminded me of The Crown by Kiera Cass.

All in all, I'm giving Winter 4 Stars. It was probably my least favorite of the series, despite being the ending point of all of these well-loved characters. Truthfully that only can be said based on how much I loved the prior books in the series. While I still liked Winter a lot, she was also my least favorite heroine. And even though I wouldn't classify Winter as slow like I feared it would be, it is still LONG. Nevertheless, Winter was a good end to an excellent series. Other than that one little thing at the very end that annoyed me I had no real complaints. Have you read Winter? What did you think? Let me know!