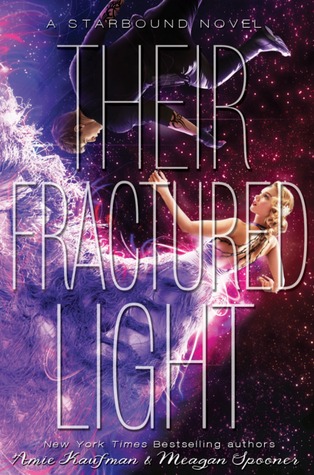 Their Fractured Light is combination of a new couple's story and the conclusion of how six people's lives are interconnected to the same end. That being said, the prior two books seemed to have more focus on the individuals of the book rather than the conspiracy and overall conflict of the series where Their Fractured Light had less time to focus on Sophia and Gideon due to having to wrap up the series conflict. Obviously this had to be the case, but I kind of missed the focus being on the two main characters of the book. However, I did enjoy seeing so much of Lilac, Tarver, Jubilee, and Flynn.

Sophia has been on the run for a while and because of this she's learned a few skills about staying under the radar. She has an uncanny ability to read people and a similar ability to mask her own intentions and actions. This, mixed with being on the run all the time, has kept her from trusting most people. Add in that her father was killed indirectly by Roderick LaRoux. This has her seeking information on how to take down LaRoux. But unlike others, she feels like LaRoux only deserves the same end as her father.

Gideon is an amazing hacker. He's been on his own since he was twelve. Because his identity as a hacker is top secret, he also has very few people he trusts. Those who know him only know parts of him and not his physical person. He also plans to take down LaRoux industries, but he doesn't quite have the intentions that Sophia does.

These two are joined together on their quest when Sophia attempts to throw Gideon--at the time, a random guy--under the bus. Only when she realizes that she's about to be run over by the same bus does she change strategies and Gideon becomes an unintentional ally. The two end up depending on each other and a bond and relationship begins to build. Yet the two both have secrets that might serve to destroy their rocky relationship.

-"The right kind of pressure can turn anyone into a monster."

-"But free will is what it means to be human, and no one can determine the path you take through this universe. Choice is our greatest right, our greatest gift--and our greatest responsibility."