The Sound of Light - DNF Review 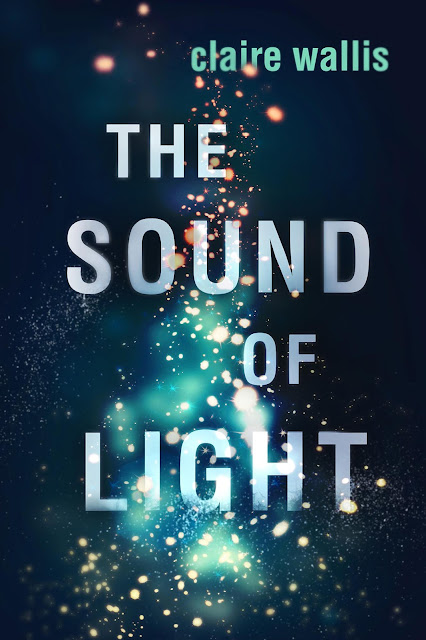 The Sound of Light

Goodreads description--My littlest girl has always been a bit peculiar. It was nothing I could ever put a finger on, but I always knew there was something inside her that made her a different kind of special. A deeper kind.

K'acy's got a light around her, one that'll just about knock you over, especially if you don't see her coming. She's got music in her soul, too. Deep, resonating music that echoes and hums, just like the notes that come from the bass guitar she's had attached to her hip since the day she turned thirteen years old.

She's got a hell of a secret, yes, but she does what she's got to do to make it one worth having. She takes care of people. She changes their stories. I spent my life telling both of my girls that you always gotta do what's right, even when it hurts, and it makes me proud to know she was listening.

I saw the way she looked at that boy on the day they met, and I knew right then that things were going to change. Two different people from two different worlds is nothing but a recipe for heartbreak, and when the lies pile higher and higher, it can change a person into something they're not.

It took me dying all those years ago to finally figure out just exactly how special my K'acy really is, and even though I'm not with her anymore, I don't want that boy and his family to change her. I want her to keep doing what's right, even when it hurts.

Because that's who she is inside. That's her deeper kind of special.

**This stand-alone novel from Claire Wallis is intended for readers age 17 and up.**

I really loved Claire Wallis's PUSH series. And so when she contacted me about reading and reviewing The Sound of Light I jumped at the chance even though the description was a bit vague for my normal tastes. Well Holly got a chance to pick it up and start reading The Sound of Light before I did so I asked her how she was enjoying it and her response was that it was a little slow and she wasn't hooked into it yet. And then a week or so passed and I noticed that she'd not marked it as finished on Goodreads yet so I asked her again about it and she said she was still struggling to connect to the romance and some other issues. So I was a bit discouraged and put off picking up The Sound of Light for even longer than I intended. The main reason is that I just don't have the time to read that I would like and so when I hear the word "slow" associated with a book I really have to evaluate whether it is worth me looking into or not. I finally picked it up. And yeah I found myself struggling as well.

The very first issue I had (which Holly had also warned me about) was the swapping narrators. This isn't always an issue for me. Typically if there are only two narrators who follow the same story in the same chronology then I'm fine. But that's not the case here. K'acy is the main narrator, but occasionally there are chapters from her dad's POV as well as chapters written from the POV of different deceased characters who used to live at the nursing home where K'acy works. I really find that books that jump around chronologically aren't my favorite so this was the first thing that bothered me about The Sound of Light.

Also, I found myself battling my feelings for K'acy in general as character. She plays bass guitar--which I don't care much for except for how it fits within the whole of a great band--for a funk band--which I don't have any connection to as I don't listen to this type of music. I could appreciate the uniqueness that these two facts bring to her character, but it made no connection with me on a personal level. K'acy also comes from a split family. Her mother left when she was young for a "preacher" of what sounds very much like a cult. Because K'acy's mother was religious, K'acy seems to have taken a negative view toward God. Her attitude was much like "how could God allow His children to suffer and die." Or something to that extent. So I couldn't connect to her in this way either considering my Christian background. I'll discuss this more in detail later. K'acy also subscribes to the philosophy that all people "deserve the best life." Despite their actions and how they've lived their lives apparently. And this is yet another philosophy that I personally can't agree with. Again...I'll discuss this in more detail in a bit. And then there's one final kicker that's a huge spoiler that I'll discuss in a hidden paragraph that K'acy also believes in that I couldn't support.

K'acy's struggle with God is not a unique one. Many people wonder how God could allow His creation to suffer. Yet what people don't understand is that this world wasn't created as it is. This world was perfect. God gave us free choice because of His love for us. But that free choice allows us to choose against Him. And that's how and where sin entered into the picture. Because God allows us to choose what isn't good for us bad things happen. And we chose and continue to choose against Him time and time again. And yet we want to shake our fists and blame Him for dealing with the consequences of our own choices. Sure there are things that happen in life that we didn't necessarily choose--like a loved one getting cancer or a car accident--but ultimately all the bad boils down to is our path away from God. God even loved us to the point of sending His own Son to die for us so that He could redeem us back to Himself. So He could buy us back from our sin. But we still reject Him. We still blame Him. We still want to accuse Him of being unloving. So I really struggled with K'acy's attitude toward God. Especially because when it boils down to it, God didn't make K'acy's mom leave her family. He didn't "tell" her to do it. Yet that's really what she's mad at Him about.

In a similar vein, K'acy keeps talking about how her dad taught her that everyone "deserves the best life." And I'm sorry but that's bull. There's nothing I've done in my life that could possibly earn me a free pass from all the bad things. There's nothing that I've done that could earn me a pass from death or suffering. I sure haven't been so good that I earned it. I've messed up. I've lied. I've cheated. I've stolen. I've not been what I should be. I don't deserve any good thing. What is good that I have is a blessing and a gift from God because of His great love for me and because of His grace and mercy. One of the deceased patients that narrates basically explains how he raped his secretary to show her that he was dominant over her--that women were less than. And yet he discusses how K'acy was there for him in the end and how she treated him like she cared. And who knows...maybe K'acy's "gift" doesn't allow her to see a person's past or what that person truly is deep inside, but I found myself completely annoyed that K'acy could offer him grace, compassion, and forgiveness that she can't extend to God--despite God not really needing those things from her. God hasn't wronged any of us. Yet this man was a rapist. And she can find it in herself to give him what she cannot give God? I don't buy it. And at the very least, her thought process is flawed.

SPOILER (highlight to view): The deal breaker for me was that I was starting to piece together some clues about K'acy and what exactly she was using her "gift" for. And so I texted Holly and asked if K'acy was killing the people she sees are going to die. Normally I don't ask questions like this. And normally Holly wouldn't answer so she asked "are you sure you want to know?" And I was like "yes, I really want to know." And she replied that yes essentially K'acy is killing the patients that ask her for help. And I'm sorry, but I can't agree with assisted suicide. I just can't. And so I asked myself if I wanted to continue to read a book where the character obviously fully believed in her philosophy, and the answer was a resounding NO. I don't care to read a character continue to try to justify this. I realize that this might not be such a black and white topic for some, but I have a firm stance on this subject. End spoiler.

All of these factors but especially the one in the spoiler left me with the undeniable decision to put down The Sound of Light. The narration and chronology jumps. The bass guitar for a funk band. The contempt toward God yet utter blind forgiveness for flawed man. The spoiler I can't support. It just told me that this isn't the book for me. And IF I had continued reading and not much changed, I'd be looking at a 1 or 2 Star rating at best. I truly hate that I felt this way because I've enjoyed Claire Wallis's writing in the past, and even the writing itself was at times beautiful in The Sound of Light, but I just don't have the time or the inclination to continue to read something that I'm not enjoying anymore. Have you read The Sound of Light? What did you think? Let me know!