Rebel of the Sands - Review 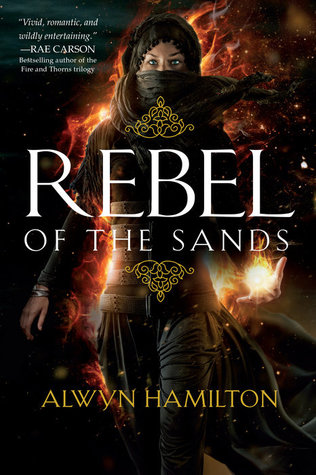 Goodreads description--She’s more gunpowder than girl—and the fate of the desert lies in her hands.

Mortals rule the desert nation of Miraji, but mystical beasts still roam the wild and barren wastes, and rumor has it that somewhere, djinni still practice their magic. But there's nothing mystical or magical about Dustwalk, the dead-end town that Amani can't wait to escape from.

Destined to wind up "wed or dead," Amani’s counting on her sharpshooting skills to get her out of Dustwalk. When she meets Jin, a mysterious and devastatingly handsome foreigner, in a shooting contest, she figures he’s the perfect escape route. But in all her years spent dreaming of leaving home, she never imagined she'd gallop away on a mythical horse, fleeing the murderous Sultan's army, with a fugitive who's wanted for treason. And she'd never have predicted she'd fall in love with him... or that he'd help her unlock the powerful truth of who she really is.

I remember seeing Rebel of the Sands available for review on NetGalley when it originally released, but the cover didn't appeal to me at all. I mean so much so that I didn't even read the book description until the re-released covers came out. These new covers are so much better to me and intrigued me to the point of checking out the description. And of course reading the description made me add this to my TBR list. So much for not judging a book by it's cover, but let's be real, with as many books as pass my line of sight for potential reading I HAVE to first evaluate the cover to see if it appears to fit my reading preferences before I read the description. It would be impossible to read the description to every book that I'm exposed to. So book covers are my first opportunity to say "yay or nay."

I've only read one and a half books that feature a dessert setting. I never thought that I would enjoy this setting. Yet I did in the previous books that I read, and it was also true for Rebel of the Sands. Potentially this is exactly because I've not read many other books in this setting so it feels unique. Alwyn Hamilton did a wonderful job creating a world that I could picture and even though it seems quite complex, I never really felt like I was overwhelmed by her creation. There are unique mythical beings, lore, and history. It was beautifully crafted and explored in just the right places to avoid information dumps.

Amani and Jin meet early in the book which for me added the desire to keep reading and see where their relationship would go from the very beginning. These two have an antagonistic relationship at first. They have similar desires which cause them team up as allies temporarily and then they ultimately have to decide how to proceed. I wouldn't exactly say they have a love/hate relationship, but I really enjoyed the development of their need to help each other out for their own causes in the beginning to being indebted to each other to then wanting to help the other and beyond.

Rebel of the Sands has a rather large cast of characters. Not all of them are constant throughout the entire book, and I felt like they were each introduced (for the most part) slowly enough not to get too confused. Well that is until we meet the rebels and several characters are introduced at one time, even a few that have similar names. Speaking of name, so many of the characters have names that I'm utterly unsure how to pronounce. While I don't mind this with a character here or there, I do find it a bit annoying when I don't know how to pronounce so many characters' names.

Considering I read Rebel of the Sands while nursing a newborn, I'm highly impressed with the speed that I read this one. Of course, when you're nursing at 2 am there's not much else to do besides browse Facebook or pick up a book. Regardless, I can't say that I felt feverish with trying to get this one read, but I certainly wanted to keep reading. I connected to Amani and her desire to escape her dreaded fate. And the early connection to Jin gave me something to look forward to. Rebel of the Sands gets 4 Stars. Have you read Rebel of the Sands? What did you think? Let me know!