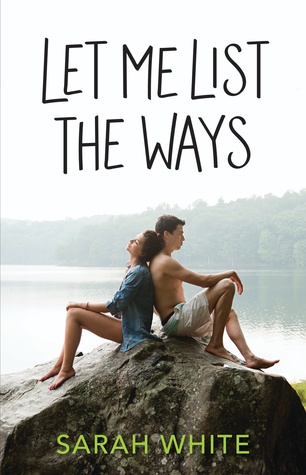 Goodreads description--A breezy, sexy contemporary YA about falling in love with your best friend, from Wattpad phenom Sarah White.

Mackenzie Clark has been best friends with Nolan Walker for as long as she can remember. She’s shared everything with him, from adventures with their families and days lounging at the beach, to long talks about their friends and her journey with type 1 diabetes. The only thing she hasn’t shared is the fact that she is in love with him.

Now in their senior year of high school, Mackenzie and Nolan know that in a few short months everything will change as they head off to different colleges. Determined to make the most of the time they still have left, they come up with a list of things they want to do together before graduation. But as they make their way through everything from toilet papering the school bully’s house to having a backyard camp-out like the ones they had when they were kids, Mackenzie can’t help feeling that she’s left the most important thing off the list: telling Nolan how she feels. But when confessing her love could jeopardize the incredible relationship they already have, is honesty really the best policy?

I find myself drawn into best friends turned more books often. The downside of this is that these stories can be repetitive in that the main reason why the characters don't reveal their deeper feelings is because they are afraid of ruining the friendship they've built. So while I was excited initially about a best friends story, I found myself frustrated a little with Nolan and Mackenzie.

The story is told from Mackenzie's POV so we obviously know quite early that she is in love with her best friend Nolan but judges based off his actions and behavior that he isn't interested in her in that way. Personally Nolan's feelings were pretty obvious to me which was frustrating. Maybe it is just me or my personality but when I was crushing on a guy big time instead of reading "he's not interested" into every action I was hopefully optimistic and probably read too much reciprocation (as a matter of fact, I know that I did). So even though I know not everyone thinks the same way I do, this part didn't mesh well for me. I just think I would have been looking for any sign that my crush felt the same way that I did.

Considering "sexy" is one of the very first words to describe this book, I don't think I would call Let Me List the Ways as "sexy". As a matter of fact, there is very little kissing in this book. A fun, cute romance sounds like a great description, but if you're looking for a kissing book this isn't it.

Personally, I really felt like there was a lost opportunity with the title. Making lists was a thing that Mackenzie and Nolan have always done. Yet there was no big list of reasons why these two loved each other. They did have that fun list of activities to re-experience through their senior year and they have a new list for college, but still a missed opportunity.

I also feel like despite growing up as best friends of the opposite sex that the parents wouldn't be so okay with the amount of time Nolan and Mackenzie are together alone. Granted I grew up with pretty conservative and strict parents, but this would not fly with them. And it won't fly if my daughter or son ever have a "best friend" of the opposite sex.

I enjoyed how Type I Diabetes played a large part in the plot and conflict of this story. This isn't something I personally know a lot about so I found it interesting. Although I do have more to say about Mackenzie's attitude and thoughts that I'll address in an upcoming Mountains Out of Molehills post.

*This review was written in February...quite early in the year.