A Return of Devotion - Review 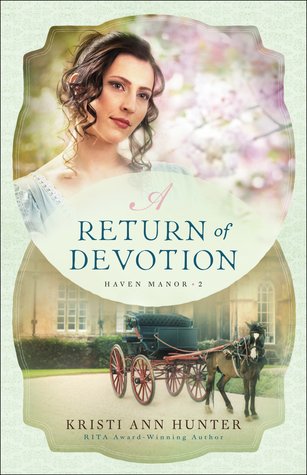 Goodreads description--Daphne Blakemoor was perfectly happy living in her own secluded world for twelve years. She had everything she needed—loved ones, a true home, and time to indulge her imagination. But when ownership of the estate where she works as a housekeeper passes on, and the new marquis has an undeniable connection to her past, everything she's come to rely upon is threatened.

William, Marquis of Chemsford's main goal in life is to be the exact opposite of his father. Starting a new life in the peace and quiet of the country sounds perfect until his housekeeper turns his life upside down.

They've spent their lives hiding from the past. Can they find the courage to face their deepest wounds and, perhaps, find a new path for the future together?

Daphne was such a relatable and likeable character in A Defense of Honor. I have only over the last year or two increased the amount of historical fiction that I've been reading, and I haven't yet read a book about a girl who got pregnant outside of marriage. One of the things I love about this particular time period is that the culture does so much to avoid even the appearance of men and women having inappropriate relationships outside of marriage. Yet, come on, this is life and human beings have always made mistakes. And so having sex and getting pregnant outside of marriage isn't only a problem of today's time. And I think we can all relate to having made a mistake that has quite heavy consequences for us.

Understandably so, Daphne's experiences have caused her to be quite fearful of life. She was always a shy girl who struggled with society and the social functions of the time period. Having Benedict allowed her to retreat from society. Even though the description indicates that Daphne has held the position of housekeeper for Haven Manor for quite some time, she's not really been acting in that position. The house has now changed hands and the new owner wants to make the house his main home, and so Daphne now has to take on the roll in an official capacity.

William's father has recently passed, and he's inherited the marquis title--as well as all of his father's property. He arrives at Haven Manor (unaware of the house's name) and is completely thrown off by his housekeeper. She's unlike any housekeeper he's ever had, and she can't seem to remember that she's not his social equal. When he meets Benedict, William can't move on without getting the entire story from Daphne.

I enjoyed A Return of Devotion. I read it quickly and didn't really want to put it down when I needed to. Yet I'm finding it hard to describe how I felt about the book and the story. I enjoyed it, but something held me back from loving it. Maybe it was Daphne's habit of daydreaming or dwelling on fantasy. Maybe it was the extremely slow build of the relationship between Daphne and William. I can't find anything really negative to say about it. It was good, but something was just missing for me to love it entirely. I can't wait to read Jess's story though--I can't believe I didn't connect her to A Noble Masquerade. And I do love how this series has taken a topic that isn't expected from this time period as the overall theme for the series. A Return of Devotion gets 3.5 Stars. Have you read A Return of Devotion? What did you think? Let me know!