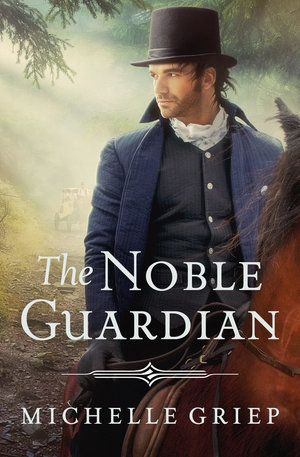 The must-read conclusion to Michelle Griep’s Bow Street Runners Trilogy: Life couldn’t be better for Abigail Gilbert—but it’s been a long time in coming. Having lived with a family who hated her, it’s finally her time for love. Abby sets off on a journey across England to marry one of the most prestigious gentlemen in the land—until highwaymen upset her plans and threaten her life.

Horse patrol captain Daniel Thatcher arrives just in time to save Abby. But she’s simply another victim in a job he’s come to despise. Tired of the dark side of humanity, he intends to buy land and retire.

Abby pleads with him to escort her for the rest of her journey. He refuses—until she offers him something he desperately needs to achieve his goal. . .money. Delivering her safely will give him more than enough to buy property.

So begins an impossible trek for the cynical lawman and the proper lady. Each will be indelibly changed by the time they reach her betrothed, if they don’t kill one another first—or fall in love.

The Bow Street Runners series hasn't been a complete win for me. I really enjoyed Brentwood's Ward, but The Innkeeper's Daughter was a disappointment. I wanted to put off reading The Noble Guardian mostly because I needed a change in genre, but the publication date was quickly approaching so I decided to go ahead and read it.

I could quickly tell that the story and characters would be more interesting to me than The Innkeeper's Daughter. Abby's struggle with her family was heartbreaking from the beginning. Her determination to remain strong and her hope for a bright future despite her past was what really pulled me in.

Thatcher took a bit more convincing to be Abby's guardian than I expected. I guess my ignorance of what would be involved in being a traveling guardian came out here because I was expecting Thatcher to ride in the carriage with Abby so they could have all kinds of great conversations. It makes sense that this wouldn't be the case as the culture of the day wouldn't have really allowed it, plus you can actually guard better OUTSIDE of the carriage I suppose. I had no real complaints about Thatcher himself. Maybe a little more backstory besides him having been in the military and having lost a sister when he was younger. Not much else was explored.

I never even thought about the difficulties of transporting a baby in a carriage for long distances. Man, this was an interesting addition. Emma's part of The Noble Guardian was bittersweet. She was endearing, and as a mother of two young children, I can completely understand how draining it must have been to look after her in a confined space without the safety features we would have today.

-"In my line of work, you run either from God or toward Him."

-"Past hurts often lose their sting when shared with others."

-To be driven to such extremes, loving wholeheartedly and desperately wishing for a minute alone? Or was she being selfish? Either way, God bless each and every self-sacrificing mother on the planet.

-"Life is more than good ideas. It's the risks that return greater results."

The Noble Guardian was more what I've come to expect from Michelle Griep. I was interested in and invested in the characters' well-being and happiness. While Thatcher was definitely involved in law-keeping and guarding, he had much less of a mystery to solve than the prior two books in this series. Personally, I was glad for that. The Noble Guardian gets 4 Stars. Have you read The Noble Guardian? What did you think? Let me know!