The Heart of a Vicar - Review 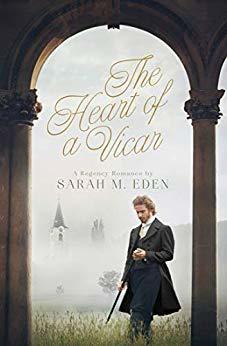 The Heart of a Vicar (The Jonquil Brothers, # 6)

Goodreads description--Young love is all too fleeting, as Harold Jonquil painfully discovered years ago when Sarah Sarvol, the niece of a neighboring landowner, captured his heart. After an idyllic few weeks in the throes of blossoming love, reality intervened. They could have no future. Following their disastrous parting, Harold attempted to push aside thoughts of love and regret, but Sarah has never left his heart. Now, years later, he has achieved his lifelong aspiration of becoming the local vicar. However, the role proves more difficult than he imagined. He feels hollow and uninspired—until the most important person in his past returns, challenging him as no one ever has.

When Sarah’s ailing uncle summons her back to the family estate in England, there is only one person from her past she is reluctant to see again: Harold Jonquil, the only man who has ever claimed her heart. But when she comes face-to-face with her former beau, she hardly recognizes the aloof and dull man before her. She is determined to help Harold rediscover the passion he once felt toward his chosen profession. Soon, despite their exasperation with each other, they cannot deny the stirring of feelings long buried—but is it too late for second chances?

First off, I haven't read any of the prior books in this series, and The Heart of a Vicar is book 6 in that series. I generally try not to request books for review when I haven't read the prior books in the series, but the author, Sarah M Eden, is what initially drew me in. And the nature of a series like this is that each book follows a different brother in the Jonquil family. So even though I'm coming into the middle a series, mostly I figured I would be able to read this almost as a standalone. In some ways I was right, and in other ways I was wrong. There are 7 (I believe) Jonquil brothers. And for someone who isn't familiar with the family or their backstories or what has happened in the prior books, this was a lot of characters to get to know--especially as most of the brothers at this point have wives and even children making the cast of characters quite large.

Reading The Heart of a Vicar did spark my interest go back and read the previous books of this series. And ironically, I remember seeing several of the previous books available for review on NetGalley in the past couple of years. I declined requesting those for review exactly for the reason I stated earlier--that I generally don't like to pick up mid-series. However, it hasn't been until the last year or two that I've increased the amount of historical fiction that I'm reading. And Sarah M Eden is an author I've recently read in another series and decided I wanted to read more of.

I won't say that Harold and Sarah's story was perfect for me. A lot of the romantic development between the two characters occurred before the book even began when the characters were younger. This creates conflict between them, but one of my favorite things to read is the initial romantic sparks.

More than being a romance story, The Heart of a Vicar is a story about finding one's self. Harold isn't sure of himself or what he always assumed was his purpose in life. He has to go backward in order to go forwards. The dynamics between his family, how they affect him, and how he affects them is all central to the story.

I fell in love with this family. Philip drove me crazy but I can't wait to read his story. Sorrel broke my heart. I wish the cause of her difficulties in carrying a pregnancy to term were discussed in more detail or explained a little more. Layton and Marion...especially Caroline crawled right inside my heart and took up residence. Mater and Scott too.

Sarah and her family difficulties were interesting, but I don't know. Something kept me from fully connecting to this storyline or its issues. Maybe just because I assumed it would all work out.

-Patience is a virtue. Endurance is a necessity.

The Heart of a Vicar had a slow start for me. I fell in love with the entire family of characters and can't wait to go back & read the previous books in the series. I wish I'd been able to read more of the events that made Harold and Sarah initially fall in love, but I did enjoy seeing them work through their current issues. The Heart of the Vicar gets 3.5 Stars. Have you read The Heart of a Vicar? What did you think? Let me know!

Email ThisBlogThis!Share to TwitterShare to FacebookShare to Pinterest
Labels: 3.5 Stars, HistoricalFiction, Regency, Sarah M Eden, The Heart of a Vicar, The Jonquil Brothers