With this Pledge - Review 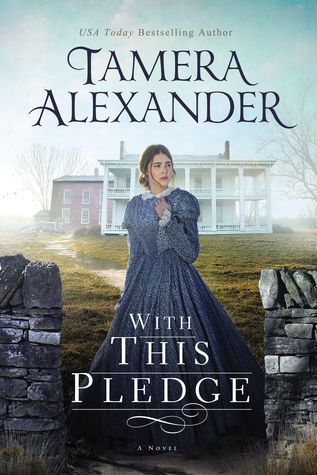 On the night of November 30, 1864, a brutal battle in Franklin, Tennessee, all but decimates the Confederacy and nearly kills Captain Roland Ward Jones. A decorated Mississippi sharpshooter, Jones has a vision on the battlefield and, despite the severity of his wounds, believes his life will be spared. But a life without his leg, he can't abide. He compels Elizabeth "Lizzie" Clouston—governess to the McGavock family at the Carnton mansion—to intervene should the surgeon decide to amputate. True to her word, Lizzie speaks on his behalf and saves not only the captain's leg but also his life.

When a fourteen-year-old soldier dies in Lizzie's arms that night, the boy's final words, whispered with urgency, demand that Lizzie deliver them to their intended recipient. But all she has is the boy's first name. And, as she soon discovers, there's no record of him ever having enlisted. How can she set out alone across a land so divided by war and hatred to honor her pledge? Even more, does she dare accept Captain Jones's offer to accompany her? As he coalesces at Carnton, romance has blossomed between him and Lizzie—a woman already betrothed to a man she does not love.

From the pages of history and the personal accounts of those who endured the Battle of Franklin, Tamera Alexander weaves the real-life love letters between Captain Roland Ward Jones and Elizabeth Clouston into a story of unlikely romance first kindled amid the shadows of war.

I have been reading historical fiction in droves the last two years. For the first time in my life, I have read more historical fiction (so far) this year than any other genre. That being said I usually skip a few time periods due to factors that don't align with my reading preferences. One of those time periods is the US Civil War era. Well... because...racism. And white privilege. What could I possibly add to the conversation? Racism = bad. I don't know. I feel like even that much is going to bring the social justice warriors to my blog telling me that I'm not condemning racism hard enough or something. I just don't even want to go there.

What I will say is that With This Pledge was the perfect read for this time period for me.

Here's why. In a world where being called a racist is thrown about so frequently, true racism existed during this time. The difference in today and then is so stark. While I certainly can't and won't say that racism doesn't exist today (racism will probably always exist in some form or other, same as murder. rape, and other horrors), things just aren't the same today as they were then. I appreciated that Tamera Alexander chose her heroine to be opposed to slavery, and yet her hero had to work through changing his thoughts on the subject.

The ugliness of war wasn't shied away from in With this Pledge. The battle itself wasn't described, but the aftermath very much was. The blood. The injuries. The emotions. All of them. The surgeries. The death. So many people who couldn't even be helped. I'm coming to believe that probably most (every?) nation has at some point been on the morally wrong side of a war. With this Pledge made me realize that good men (and women) are on both sides of every dispute, even the wrong side.

Love stories typically drive my interests in books. That was no different for With this Pledge. Lizzie and Roland's story drove me to keep reading. I already know how the war ends, but I didn't know how Lizzie and Roland's relationship would work out. These two had a lot to work through. Lizzie couldn't pursue a relationship with someone who could support slavery. They each have personal relationships with God that grow through the story. Roland is also dealing with the loss of his wife and daughter. And well, Lizzie is engaged to someone else. So there's a lot of drama to the relationship that kept me reading.

All of the characters (for the most part) were utterly lovable. Winder, Hattie, Schuler, Tempy, Carrie, Colonel McGavock, Dr. Phillips, Sister Catherine, George. And of course, Roland and Lizzie. I loved them all. Each so well rounded. And to know that most of these were based on actual people gives me the warm and fuzzies.

One of my absolute favorite parts of With this Pledge was the faith aspects. To show that even in the darkest times of life....no, in spite of the darkest times of life...God is still here. He's still working. Every man is appointed once to die. No one is guaranteed any specific number of days or to die at peace in old age. His existence doesn't mean that suffering isn't present. These character's faith in God moved me.

-"...he'd found himself already making peace with death, something he'd done many times over the past three years. But making peace with death was a tricky thing because death wasn't something one merely acknowledged once and then it was done. Death was stealthy, shadowed and cloaked. And above all, unreliable. Just when you were certain you were done for--that death had tapped you on the shoulder and your last breath was only a breath away--death would slip right past you."

-"And sometimes, in remembering, I catch glimpses of who I was then and can see myself more truthfully than I did at the time. Which, in turn, sheds light on who I have become, and how far I still have to go to become who I hope to be in Christ before I die, if that makes any sense."

-"There was a time I drank to try to forget. But in my experience, Sister, dulling a memory doesn't empty it of its power. Or its pain. It just pushes it off to the side for a while. But it always returns."

-"Sometimes," she continued, staring into the fire, "life on this side of the veil is far more difficult than I think it should be. Especially for those of us who belong to God. But then again, his promises do not eliminate suffering." ..."And yet, with all my heart," she continued, "I trust that God knows best." A slow, almost sad smile turned her mouth. "Even in those moments when I'm fairly certain I might know better."

-What a weighty treasure parenthood was. To have the ability to whisper to a child, "Everything will be all right," and have them believe you without question. Even though it really wasn't within your power to make that promise.

With this Pledge was so much more than I expected it to be. History was brought to life for me in the best possible way. The weight of this time period is so heavy that the story could have gone so wrong. But Tamera Alexander did every single piece of this book justice in my opinion. While I loved the love story and it did drive my desire to keep reading, I have found that it was all of the other aspects of the story that have captured my thoughts and that I've spent the most time pondering. The faith laced through the story and characters. Knowing how much of this story was based on real events and real people impacted me and made it all the more treasured. I also appreciated that Tamera Alexander mentioned in her notes at the end that slavery is still in existence today. She is shedding light on something that we easily forget because it isn't so out in the open or in our face as it once was. We still need to fight for the freedom of all. I will remember this book for a long time to come. With this Pledge gets 4.5 Stars. Have you read With this Pledge? What did you think? Let me know!