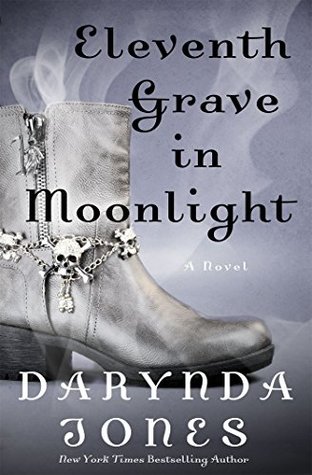 Goodreads description--A typical day in the life of Charley Davidson involves cheating husbands, missing people, errant wives, philandering business owners, and oh yeah...demons, hell hounds, evil gods, and dead people. Lots and lots of dead people. As a part time Private Investigator and full-time Grim Reaper, Charley has to balance the good, the bad, the undead, and those who want her dead. In this eleventh installment, Charley is learning to make peace with the fact that she is a goddess with all kinds of power and that her own daughter has been born to save the world from total destruction. But the forces of hell are determined to see Charley banished forever to the darkest corners of another dimension. With the son of Satan himself as her husband and world-rocking lover, maybe Charley can find a way to have her happily ever after after all.

I feel like I'm running out of things to say about this series. That's not to say that I didn't enjoy this book, I just feel like I'm getting repetitive in my reviews.

Charley takes on a new client early on. The client happens to be a man who might have been abducted as a baby by the same people who abducted Reyes as a baby. Or he could be their biological son. Charley has wanted to investigate the Fosters for some time, but Reyes hasn't wanted her to. Having Shawn Foster as a client gives her the perfect excuse. I felt like Reyes's objection to Charley investigating them was thin. Sometimes I feel like Darynda Jones does a great job balancing all of the pieces of the puzzle, but this time the Foster investigation took a back seat to other events. This was done purposefully, but it was still something I noted.

Charley found out in the previous book that her beloved Uncle Bob murdered some gang members who were after Charley. So we had to deal with some of the consequences of that which include Charley learning more about herself and her powers as Grim Reaper and as a god.

In previous reviews I've stated that I appreciated Jehovah being included in this story as someone that Charley believes in and respects. Of course the more we have explored this area the more uneasy I've become. Sometimes the story feels sacrilegious, but I try not to read too much into this because it is a fictional story. I'll just reserve my full opinion on this for when I finish the series.

Darynda Jones has always written in departed characters or clients who seem to have experienced the worst of humanity. There are times when my stomach physically hurts reading about what they have experienced. That was certainly the case for the part of the story that involved Amber. Thankfully Charley does note that humanity is more good than evil even if the line is a little closer to the middle than she would hope.

And then there is the end. This was supposed to feel like a twist or a surprise. But really this has been built up for the entire series. To not have to confront this possibility head-on at some point would have wasted a lot of build-up, yet at the same time, everything with this felt predictable when it should have been a huge surprise. I can think of one twist that could have potentially been more surprising. But we'll see how this plays out.