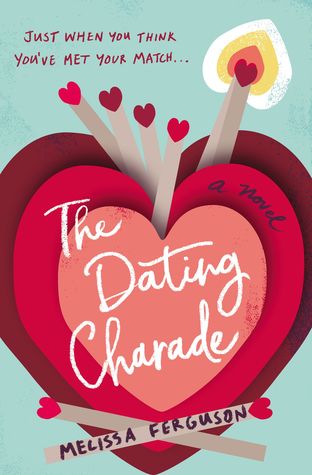 Goodreads description--Just when you think you’ve met your match . . . the charade begins.

Cassie Everson is an expert at escaping bad first dates. And, after years of meeting, greeting, and running from the men who try to woo her, Cassie is almost ready to retire her hopes for a husband—and children—altogether.

But fate has other plans, and Cassie’s online dating profile catches the eye of firefighter Jett Bentley. In Jett’s memory, Cassie Everson is the unreachable girl-of-legend from their high school days. Nervously, he messages her, setting off a chain of events that forces a reluctant Cassie back into the dating game.

No one is more surprised than Cassie when her first date with Jett is a knockout. But when they both go home and find three children dropped in their laps—each—they independently decide to do the right and mature thing: hide the kids from each other while sorting it all out. What could go wrong?

Melissa Ferguson’s hilarious and warmhearted debut reminds us that love can come in very small packages—and that sometimes our best-laid plans aren’t nearly as rewarding and fun as the surprises that come our way.

Have you ever had a friend that you don't see regularly, but when you finally get an opportunity to see each other, they talk to you about things like you stay caught up with each other daily? I don't mean in a pick-up-where-you-left-off kind of way, but like they're talking to you about things as if you're already aware of who certain people are or events like you've already discussed them. Like picking up in the middle of a conversation, but you missed the entire first part? Well, that's how The Dating Charade felt to me at times. Too many instances where I felt like I was missing the first half of a conversation and had to use context clues to figure it out. Of course, I could do that, but each time I felt pulled out of the story and had to stop and backtrack to see if I'd missed anything.

I did enjoy The Dating Charade. I have a special place in my heart for people who step up for children in need. My cousin fostered two kids before they were placed with their maternal grandmother, and two of my cousins were fostered and ultimately adopted. Doing this in my own life is not out of the realm of possibility. So both Cassie and Jett's stories were wonderful.

I felt emotionally invested in every single character. I loved Cassie and Jett and each of the six kids involved in this story. I loved Sunny and Sarah. And I even loved the brief scenes involving Cassie's mom and best friend Bree.

I will say that this is one book I wish was a little longer. We can obviously tell that Cassie and Jett have a great first date and feel a connection. But their interactions beyond that are pretty short and infrequent since each is dealing with some major home challenges and changes. We're told how much they connect, but I just wish we could have experienced it more first hand. A show vs tell situation here.

The Dating Charade wasn't a perfect read for me. I wanted more romance. Understandably, the two struggled to get any alone time considering their home situations, but I felt like one or two more in-depth dates would have benefited the story significantly. The side characters all came to life, and I cringed for each and every one of the children--especially as a mother. I just wanted to love on them all. The Dating Charade gets 4 Stars. Have you read The Dating Charade? What did you think? Let me know!