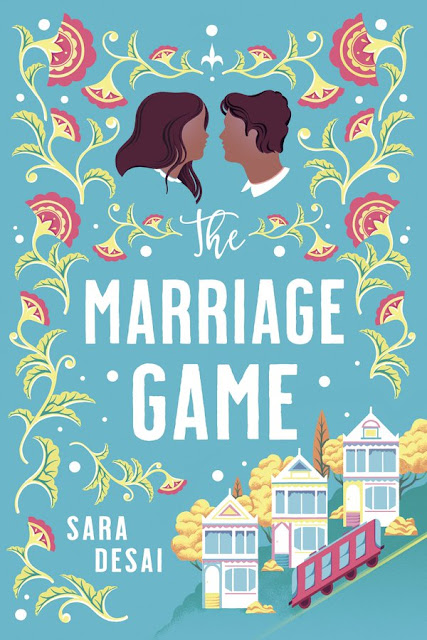 Goodreads description--It's a clash of culture in this romantic comedy about arranged marriages from Sara Desai.

Layla Santos is the child of first-generation immigrants from India. Her parents run a Michelin-starred Indian restaurant in San Francisco and are very traditional in their ways, including a firm belief in the benefit of arranged marriages. Her father, thinking he knows best, signs Layla up for IndianGirlMatch.com and sets up a series of dates without telling her....

Sam Mehta is the self-made CEO of a corporate consultancy specializing in downsizing. Also the child of first-generation immigrants with traditional beliefs, his famly treated him like a prince and saw him as a symbol of their social and economic strength. But his sister's marital experience has taught him that parents don't always know what's best for their children, and arranged marriages don't always end in a happily ever after.

When life throws Layla and Sam into close quarters, Sam finds himself unexpectedly chaperoning Layla on her dates. But neither can deny the chemistry building between them, and they wonder if perhaps they should make an arrangement of their own...

I am so intrigued by the idea of arranged marriages. On the one hand, I am so thankful to have been able to fall in love with my husband and marry for love. But on the other hand, I can see the appeal of arranging a marriage that starts out as friendship based upon shared beliefs and ideals and builds into more. I always seem to root for these relationships in books. Usually, I am reading about historical London society when arranged marriages come into a storyline. Sara Desai did a great job showing the complete range of possibilities you might encounter from an arranged marriage.

I wasn't sure what to expect from The Marriage Game. I was not familiar with the author. I didn't know whether I would connect with the cultural differences. And I've been both in a reading hangover which has been affecting my enjoyment of books as well as in a place where I am quick to DNF.

You guys! I loved The Marriage Game. Sure there were words I couldn't pronounce. There were things I didn't understand, but Sara Desai did a pretty great job explaining things she knew some readers might not be familiar with. I will say that I didn't fully understand how culturally it seemed to be important to maintain the appearance of propriety by not having an unmarried man and unmarried woman spending time together versus that actually happening quite frequently. It just left me a little confused on how Indian culture really feels about those things.

I liked Layla a lot. She's been hurting since her brother passed away a few years ago. She tried to make herself feel better with a string of men. After breaking up with her boyfriend and losing her job in New York she moves back home. Her father has a heart attack shortly after she gets home and she finds out that he has been weeding through a ton of resumes for arranged marriage candidates. She basically decides to see if any of the men her father picked out might be real potential matches for her.

Sam left a surgical career path after his mentor and brother-in-law attacked his sister. He felt guilty that he couldn't see the man for who he really was. He couldn't protect his sister. And all of his decisions since have been influenced by this. Even though he doesn't know Layla well, he strikes a deal with her (or a game) to go meet the men her father lined up for her potential husband. He will serve to try to weed out any candidates that might be dangerous or just duds.

Layla and Sam start out with an antagonistic relationship. They both want the office space over her parents' restaurant and this is the prize for their marriage game. During the meetings with potential husbands, Sam and Layla learn more about each other than the suitors. I loved their banter. It was easy to see there was an attraction between the two. Tension sizzled. I loved it.

I wasn't expecting the physical scenes. I think there were two maybe three, but they were medium descriptive. I prefer to read around a light level personally. I hate including this in every review, but I certainly feel the need to address it when I come across these types of scenes in case others care about the level of description as well. I can see that being a deal-breaker for some readers.

The writing was exceptional. I was hooked so quickly which has been rare for the reading mood that I have been in lately. I actually laughed out loud more than once which is also extremely rare for me so kudos to Sara Desai for that as well. I will 100% look into future books written by her.

I am so glad that I picked up The Marriage Game. It was a breath of fresh air with the comedic influence, the hate-to-love relationship, the aspects of Indian culture, and the writing style. I can heartily give The Marriage Game 4.5 Stars, and I will be stalking Sara Desai on Goodreads for more books. Have you read The Marriage Game? What did you think? Let me know!