A Portrait of Loyalty - Review 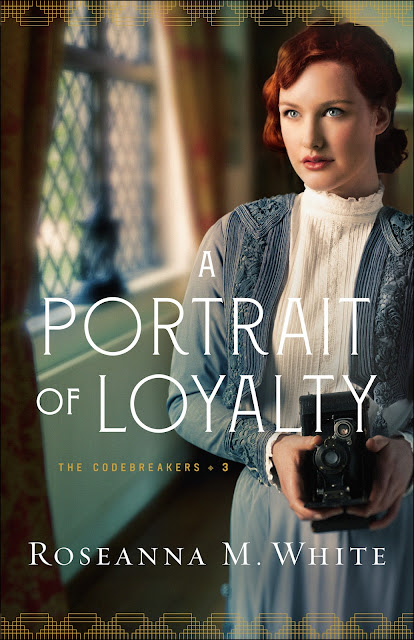 A Portrait of Loyalty (The Codebreakers, # 3)

Goodreads description--Zivon Marin was one of Russia's top cryptographers, until the October Revolution tore apart his world. Forced to flee after speaking out against Lenin and separated from his brother along the way, he arrives in England driven by a growing anger and determined to offer his services to the Brits.

Lily Blackwell sees the world best through the lens of a camera--and possesses unsurpassed skill when it comes to retouching and recreating photographs. With her father's connections in propaganda, she's recruited to the intelligence division, even though her mother would disapprove.

After Captain Blackwell invites Zivon to dinner one evening, a friendship blooms between him and Lily. He sees patterns in what she deems chaos; she sees beauty in a world he thought destroyed. But both have secrets they're unwilling to share. When her photographs reveal that someone has been following Zivon, his loyalties are called into question--and his enemies are discovered to be far closer than he'd feared.

I seem to be developing inaccurate impressions of several books lately based upon who knows what. I enjoyed The Number of Love, but I had a few things that bothered me. One of the biggest things is that one of the narrators is from the villain's point of view. I don't usually enjoy this. Plus Margot was a little more difficult for me to connect with. On the other hand, I was so surprised and impressed with how much I enjoyed On Wings of Devotion. It too had a villain's point of view, but my love for Camden and Ara surpassed any frustration with having to read from the villain's perspective. For some reason, the impression I got of Zivon from the prior books was that he was older. So I was surprised to find him the leading male of A Portrait of Loyalty. But I found that I was dreading the expectation of reading from another villain. Plus I expected to be a little disappointed after coming off how much I was impressed with On Wings of Devotion.

A Portrait of Loyalty ended up being a pleasant surprise just as much as On Wings of Devotion. My biggest fear of reading from another villain was twisted by the fact that our "villain" of this story was Zivon's brother, Evgeni, who I couldn't fully find myself rooting against. There was hope that he might find a better way of thinking, that he also might find love and a happy ending. So with that out of the way, there was only room left for good things.

I was intrigued and struck by the amount of photo manipulation used so early in our history. You wouldn't be surprised to hear of photos being fakes or photoshopped today, but to learn that this was not just used during World War I, but that it was done so well and frequently was impressive. I was utterly interested in every aspect of the photography pieces of this story.

Zivon and Lily have such a sweet story. I loved how they were each able to see in the other things that others so quickly missed or dismissed. Lily noticed despite the stillness in Zivon's body, his eyes and mind seemed to be always in motion. Zivon seeing the beauty in the world through Lily's camera and photo work. Zivon has such baggage that he's coming to England with. Pain of betrayal. Loss of his family, career, and future. Guilt of his fiance's death as a message to him. And fear of who he can trust now that he's made it to England. Yet Lily breaks through his barriers.

Lily's family made for excellent supporting characters. Her mother shares her love of the arts only in a different medium. And her sister, Ivy, is one that anyone could wish to have as a sister. Their closeness was enviable. And even Lily's father didn't seem to be largely present yet made an impact when he was involved. My heart hurt as they went through struggles and the pain of loss through the book. This was the only place I teared up.

And perhaps my favorite part was how shocking I found it that the events of this story so closely mirrored much of what we're facing in the world and specifically in the United States in 2020. A global pandemic (COVID-19 vs the Spanish Flu), the threat of socialism, a country divided in goals and how to achieve what we all desire, propaganda, manipulation, and more. I, honestly, felt my heart break a little bit to see history threatening to repeat itself. Truth be told, I typically hate any politics being included in my reading. However, A Portrait of Loyalty's political messages felt true to the story itself and not really a commentary on today's society even though I was able to extract things that I wanted to apply to today. It didn't feel to me like that was the goal of the author which is what I rail against most of the time when politics are included in books.

Too many quotes I highlighted:

-They wouldn’t, if they realized that socialist “freedom” involved killing anyone who held a different view. That was no freedom. That was the worst form of tyranny— the kind that lied about what it was.

-“Sometimes people have to make a hard choice, you know. For the greater good.” “And more often people trample the helpless for their own good and just say it is for the sake of others.”

-“I just find it sad that so many people think they can find true happiness by taking. They can’t. We can only ever find it by giving.”

-“But Batya used to say that the difference between a wise man and a fool was not that the wise man was right and the fool wrong— but that the fool always assumed himself right, and the wise man would wonder if he could be wrong. We cannot learn from our mistakes and grow wiser if we never admit to the times we’ve chosen the wrong path.”

-“Disagreeing with someone shouldn’t mean I think they have no right to live, to work, to be given a chance for happiness.”

-"I love you.” She jerked. She couldn’t help it. But she didn’t bolt for the door as she probably would have done a few months ago. “Are you trying to shackle me?” He breathed a laugh, shook his head. “Who said love had to be shackles? I’m not trying to hold you anywhere, force you to do anything. This is a gift to you, [...]. I give it freely. I demand nothing in return. You can love me or you can not. You can stay with me or you can go. Either way, I will love you. I will love the very spirit that may insist you run far and fast.”

“But I hope, of course. I hope you’ll stay. I hope you’ll accept my love— not as a prison trying to make you be something you don’t want to be. But as . . . wings. To help you reach whatever heights you strive for.”

-It is not freedom that is extended to all, only to those with whom one agrees. This is what our American allies have taught the world, is it not? True freedom means freedom to disagree.”

-“We must be still— not our hands and feet, but our minds. And know that He is God. That He has not changed. That the same Lord who loved us when all is well loves us still when all is lost. His promises are as true today as they were yesterday. He has been enough to see people through the worst since the dawn of time. We must trust that His love is enough to see us through now.”

-“We mustn’t let such things come between us anymore. Not anger, not secrets, not fear. They will not rob us of the life God has given us.”

-“No. Freedom comes only when the people realize that it cannot be stolen and forced. Freedom that is denied to anyone who disagrees is no freedom at all.”

I truly felt like many in America could benefit from reading this book. The refresher of the dangers we face and the only true way to find freedom from the bondage of this world. And even the dangers of being at odds with each other in such a way as to try to silence those who disagree. This is not the America that was dreamed of in the beginning or what we've fought for through our short history.

A Portrait of Loyalty surprised me in every way. I was expecting to dread the villain's point of view. I wasn't expecting to find myself rooting for him in some ways. The relationship between Zivon and Lily rivaled that of Camden and Ara. And I was most impressed with the mirroring of the time period with what we are facing today. Where normally I abhor politics in reading, I found the messages weren't directed at the reader but were true to the characters and the story itself. It just so happened that I was able to pull from the story and apply that to today. This is how to do politics in reading if you ask me. A Portrait of Loyalty gets 4.5 Stars. Have you read A Portrait of Loyalty? What did you think? Let me know!